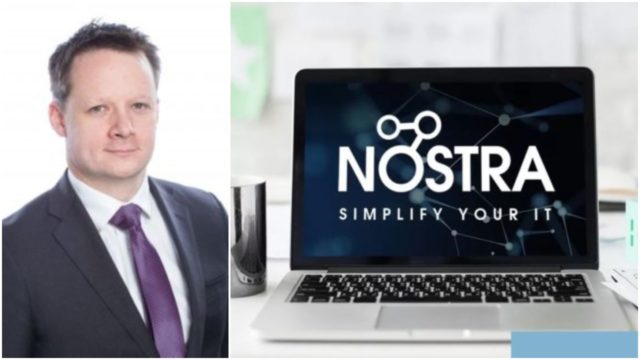 A Laois man who employs close to 100 people in his IT business Nostra, based in Dublin, is looking to create a number of jobs in his home county.

Kevin O’Loughlin, who is originally from Rosenallis, has plans to create 10 jobs in the new Webmill Digital Hub in Mountmellick as he seeks to expand the business he set up in 2007.

It has been some journey over that time – with the recession kicking in in March 2008 when it was, as Kevin says, “a daily grind to survive”. That lasted until the end of 2011.

Nostra oversees the IT responsibilities for companies in Ireland and across the world.

They’ve clients in the manufacturing industries, aircraft leasing and numerous Credit Unions around the country. The Dawn Farm Food group, Boyle Sports and Image Magazine are among some of their clients.

It’s quite the success story for Kevin who set up the company with Senan Finucane, Gary Byrne and his brother Barry.

Over the last two years Kevin, who was a finalist in the hugely prestigious Ernst and Young Entrepreneur programme, has overseen two acquisitions and there’s more on track for the next year.

“We’re growing every month and we’re as focused now on growth as we have ever been,” says Kevin, whose father Tom was hugely well-known in Laois through his involvement in Laois GAA and in the meat industry.

One of the great challenges now is recruiting staff and a base in Mountmellick would be of huge value to the business.

“A good base in the midlands would give us easier access to Galway and Limerick,” explains Kevin. “95% of issues can be sorted remotely but we have engineers dotted everywhere and a four-hour promise to get to our clients if we have to.

“We are looking for applications. The belief is there are a lot people driving to Dublin that are suitable for these roles.

“Our staff retention is good and we have done well in recruitment but one of the challenges is getting new people.

“We want to open a remote office and attract staff from that area. Our family being from the area is important to us too.”

Kevin grew up in the family pub and farm in Rosenallis in the 1980s though Tom’s meat business brought them to Carlow and the family moved to live in Graiguecullen and he went to secondary school in Knockbeg College.

His first job was collecting glasses in the pub in Rosenallis; in the 1990s as a teenager during the school holidays he was measuring the fat on pigs in his father’s factory. Hard work and having a head for business were in his genes.

After the Leaving Cert he went to DCU to study Computer Applications but that course wasn’t for him and he dropped out and got a job with an IT company called Typetec.

He was a while there when he re-applied to go back to college. But he was offered a permanent position, a company and a laptop and he stayed.

The entrepreneurial streak came to the fore after a while and along with his work colleagues Finucane and Byrne, they went out on their own and brought a handful of staff with them to start their new company.

Things got off to a great start and though the years from 2008 to 2011 brought huge challenges and stresses, they got through to it and now are powering on.

“We’d like to think in the next 10 years we can grow to a substantial company.”

Nostra are currently recruiting for Support Engineers at various levels to be based in Laois, including a team lead as well as Level 1, 2 and 3 roles.