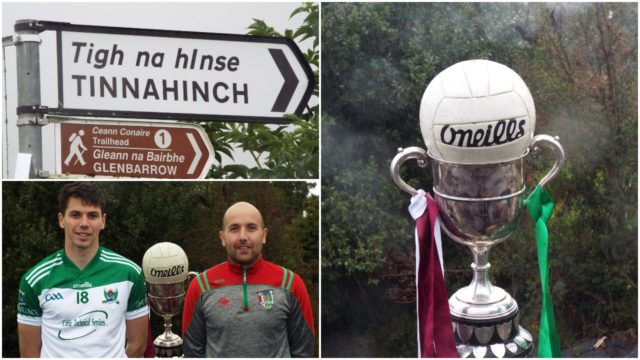 There is a huge double header of football action in O’Moore Park this evening with the Intermediate and Junior football finals down for decision.

Here, we take a look at the IFC final between Rosenallis and Clonaslee.

Neighbours will go head-to-head this evening as Rosneallis take on Clonaslee for Intermediate honours in what promises to be an exciting affair.

Just tghis week, we took trips to Rosenallis NS and Scoil Bhride in Clonaslee where the excitement was palpable.

Back in the 2000s, Clonaslee and Rosenallis joined forces in hurling and, as Tinnahinch, reached three senior finals.

On the football field, their meetings have been rare enough. Clonaslee have spent the majority of the last decade yo-yoing between senior and intermediate.

While Rosenallis were Junior champions in 2016 where they went on to win the Leinster competition.

En route to the semi final of this competition, Rosenallis enjoyed routine wins over Annanough and The Rock – scoring 5-30 in the process.

They fell at the semi final stage last year to Mountmellick Gaels but Portlaoise proved no match for them this year as they won 2-14 to 0-5 to reach the final.

As for Clonaslee, their journey to the final has had a few bumps but also some high points along the way.

They won the Division 2 football title at the end of July but then lost to the same opponents, Portlaoise, in Round 1 of this competition a week later.

But they then came through a tough encounter with Timahoe to get themselves back into the championship.

They scored an easy victory over The Rock in the quarter finals then to progress to the semi final where they scored a seven point win over 2018 defeated finalists Mountmellick.

Discipline has been Clonaslee’s problem with two red cards in the Portlaoise defeat and one against Timahoe – but they kept their full compliment on the field against The Rock and Mountmellick where they won easier.

Clonaslee also have received a boost as two players, William Murray and Darren Hogan, who were banned after illegally playing in a Junior C hurling final against Rosenallis earlier this year, have had their suspensions reduced and are free to play.

John Rigney, Glen McEvoy, Jack Owens and Will Young will all be integral to how Clonaslee play. While the C-Fennell brothers (Ruaidhri, Cathal and Fiachra), along with John Lennon, Paddy Keating, Ronan Murray and Eoin Dunne will be very important for Rosenallis.

The weather forecast isn’t great and that may well suit Clonaslee better but Rosenallis’s athleticism may just be the telling factor in the end.