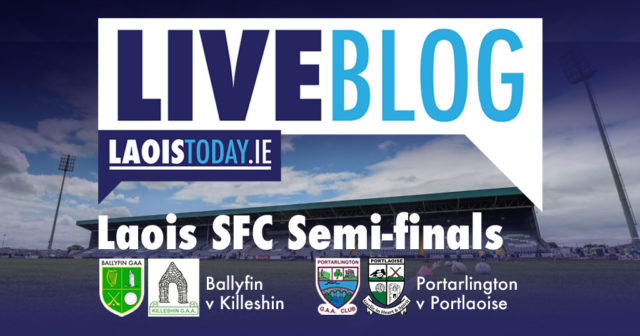 And we’re really down to business now.

After four rounds of action that started back at the end of July, the Laois SFC is now down to just four teams.

Barring a draw, it’ll be down to two after today.

It’s semi-final day in the Laois SFC with two fascinating semi-finals down for decision. Champions Portlaoise meet Portarlington in the opening game at 2pm while the novel pairing of Killeshin and Ballyfin is at 3.30pm.

Can Portlaoise reach a 13th final in a row and keep their latest three-in-a-row bid alive?

Can a young Portarlington team come of age?

Who of Killeshin or Ballyfin will reach a first ever final? Have Killeshin more in the tank from the last couple of years? Or will Ballyfin’s wild and magical campaign continue?

By 6pm all those questions should be answered.

We’ll bring you every minute of the action as it happens.