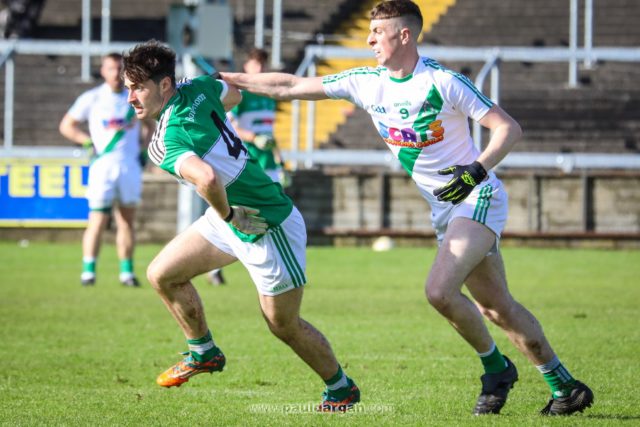 After a gripping drawn Laois SFC semi-final in O’Moore Park last Sunday, Ballyfin and Killeshin resume their battle tonight with Portlaoise awaiting the winners in the final on Sunday week.

Both sides will feel they could have won it but few could say that a draw wasn’t a fair result.

While Ballyfin got off to a dream start with an early Sean Moore goal after a short kickout went badly wrong, Killeshin reeled them in by half time, with Cathal Brennan’s cracking goal crucial.

The sides were level 1-6 apiece at the break but Killeshin went four points ahead thanks to a goal from their go-to forward Eoin Lowry.

But in a slow-burning affair, Ballyfin fought back bravely and actually took the lead late on before Eoin Lowry levelled things again.

Killeshin did have one final chance to win it but Stephen Attride’s pot shot went wide and Seamus Mulhare sounded the final whistle almost straight away.

It would have been some winner from Attride who also did a great job in the role of having to man-mark Sean Moore.

Killeshin could probably do with having Attride further out the field but it suits Ballyfin to have him tied up at corner-back. Would it be worth Killeshin’s while risking it and trusting one of their full-back line on Moore this time around?

That’s just one of many of the individuaul battles worth keeping an eye on again – with the David Connolly-Eoin Lowry duel at the other end just as central.

Limiting Darragh Connolly’s influence will be key for Killeshin and Ballyfin will be hoping that Connolly can shrug off the injury that seemed to be bothering him throughout the second half on Sunday.

Ricky Quillinan, who flicked over a point from a James Finn ’45, also seemed to be struggling a bit with injury and with Ballyfin’s games coming thick and fast having been out every weekend over the past month between hurling and football.

A replay on heavy ground is a big ask for both sides, Ballyfin’s heavy workload of recent times has to be a factor.

While Ballyfin have the X-Factor and are on an unprecedented run of senior games, Killeshin’s depth seems greater.

It might be enough to get the over the line – even if extra time can’t be ruled out.