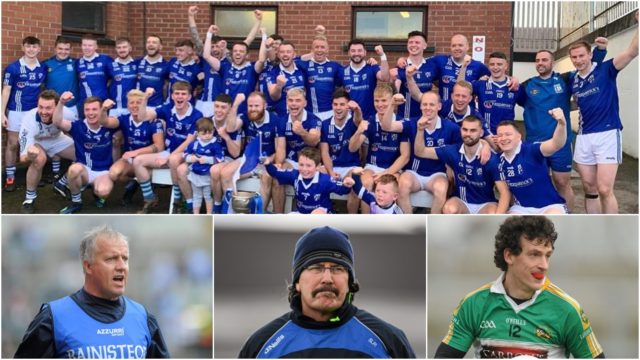 There was two significant club results in the Offaly and Kilkenny club championships this afternoon with strong Laois involvement in both.

Ferbane won the Offaly senior football title for the first time in 25 years under the management of former Laois boss Sean Dempsey.

Ferbane beat champions Rhode on a scoreline of 2-13 to 0-14 in Tullamore, reversing last year’s final loss when Rhode had 11 points to spare.

Dempsey, who managed the Laois minors to All Ireland glory in 2003 and the U-21 All Ireland final in 2007 before spending two years in the senior job in 2009 and 2010, took over Ferbane at the start of this season.

And there was another strong Laois link as Ballacolla NS principal and former Offaly footballer Aidan Keenaghan was wing-forward for Ferbane.

Ferbane will now go forward to the opening round of the Leinster club championship where they will meet Wicklow champions St Pat’s and should they win that they will come up against Portlaoise in the quarter-final.

Elsewhere, in Kilkenny, there was significant Laois involvement in the senior hurling championship semi-final between city side James Stephens and Erins Own from Castlecomer.

They were 1-15 to 2-9 winners over the Castlecomer side that had Dwyer’s club-mate Eamonn Jackman as coach.

Kilkenny panellist Luke Scanlan scored a crucial goal midway through the second half while former Kilkenny great Eoin Larkin is playing centre-back for them.

‘The Village’ haven’t won the Kilkenny senior title since 2011 when Niall Rigney was manager and they have a strong history of having Portlaoise involvement with Pat Critchley having been over them in the 1990s.

The Monasterevin footballers are celebrating across the border in Kildare having won the intermediate final thanks to a 1-8 to 0-7 win over Leixlip in Newbridge.

And there was a number of very strong Laois connections.

Cormac and Eoin Stapleton are sons of Annanough native Dominic with Cormac at corner-back and Eoin midfield while his partner in midfield was Sean Kavanagh whose mother is Caroline Nash from Stradbally.

Wing-back DJ Earley is a grandson of Des McEvoy from Vicarstown and sub Mark Kelly’s has strong Emo links through his father Mick.