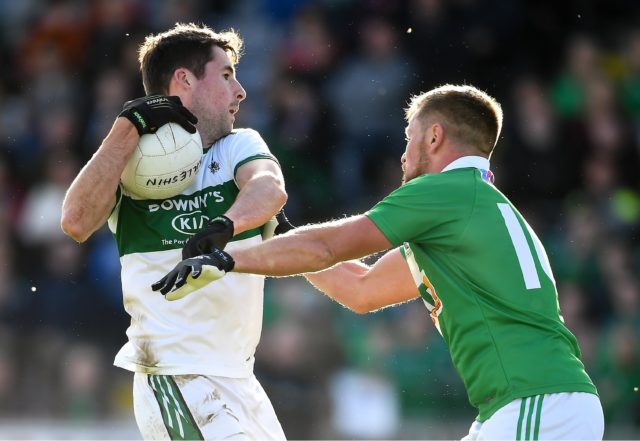 Portlaoise have been crowned Laois SFC champions for the 35th time following their narrow win over first-time finalists Killeshin in O’Moore Park this afternoon.

The first half was a real war of attrition. Killeshin, appearing in a first senior final in their history were backed by a massive and vocal crowd, and they got off to an absolute dream start.

While Kieran Lillis put Portlaoise ahead with a fine point early on, Killeshin had the ball into the back of the net in the second minute when Eoin Lowry’s shot came back off the post and veteran Cathal Brennan was on hand to tap the ball into the net from close range.

It was to be Killeshin’s only score of the half but they battled and fought for everything, forcing an amount of turnovers and generally making life difficult for Portlaoise.

Both sides could have had goals before half time too, Adam Deering very unlucky to see one chance go astray after being denied by Michael Nolan and Gareth Dillon while at the other end Killeshin got a let off when McCormack over hit his pass to the unmarked Brian Glynn.

Portlaoise were slightly rattled by the close attention but they still did enough to lead 0-5 to 1-0 at the break, with two points each from Brian McCormack and Lillis and one from Benny Carroll.

Eoin Lowry got Killeshin’s first point within a minute of the restart and then his brother Evan crashed home a spectacular goal. The Killeshin crowd duly raised the roof. And why wouldn’t they? They were two points up in a county final.

Brian Glynn settled Portlaoise with a nice point from play but David Aston cancelled that out with a free.

McCormack (free) and Gareth Dillon pointed within a minute of each other to level things up but Killeshin went ahead again when Aston pointed a ’45.

Brian Glynn and Kieran Lillis were two of Portlaoise’s top performers on a challenging day and they got a point each to put Portlaoise back into the lead.

Aston briefly levelled things up with a class point off the outside of his boot but Portlaoise scored the next three points – from Dillon, Glynn and Conor Boyle.

Aston scored twice either side of Dillon’s third point and had reason to be aggrieved when advantage wasn’t played despite Cathal Brenann pointing from play.

The otherwise excellent Aston pulled that free wide and also a later chance from play to send the game to a replay.

In the end Portlaoise did just about enough to see it out.

Killeshin’s brave effort at the end of a great season came up just short. Portlaoise go forward to a Leinster club quarter-final against the Wicklow or Offaly champions.