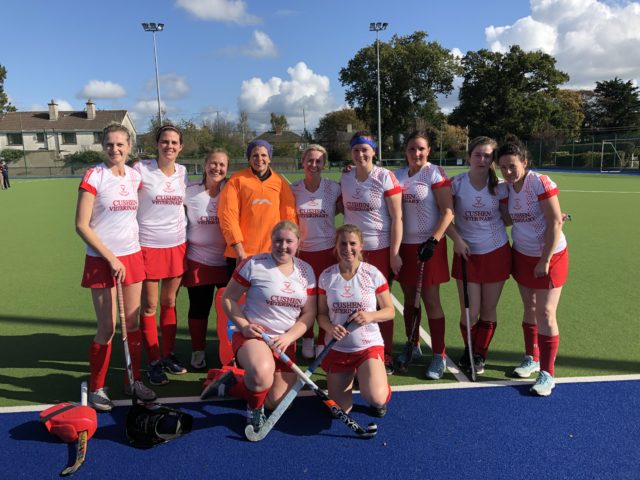 The past weekend proved to be a very busy one for Portlaoise Ladies Hockey Club who played two league matches in the one weekend.

The team achieved a great 4-2 win over Weston 2nd in the first match in Kilkenny on Saturday before losing to UCD on Sunday.

The Weston attackers scored an early goal against Portlaoise.

However, Portlaoise responded very quickly by coming back strongly and taking control of the game.

An equalising goal came from a strong back-stick strike of the ball by April Kent into the right-hand corner of the goal.

Portlaoise continued to put the pressure on the Weston defenders and succeeded in taking the lead after Yvonne Hargroves scored a second goal past the Weston goal-keeper.

A third goal came for Portlaoise in the second quarter of the game, which started with a great cross-field ball from Susan Fingleton from a hit out to Marian O’Boyle.

Throughout the game, there was great defending by all defenders, especially Eimear O’Sullivan and Susan Fingleton, who continuously tackled the Weston attackers as they broke through the mid-field players.

In the third quarter, Weston narrowed Portlaoise’s lead by getting a second score on the board but Portlaoise sealed the win with a fourth spectacular goal in the final quarter of the game.

Portlaoise defenders and midfield players moved the ball up the field and Kent crossed an airborne ball from the top right-hand corner of the circle into the centre. Hargroves’s stick made contact with the airborne ball and the ball flew past the Weston goal-keeper, giving Hargroves a hat-trick and giving Portlaoise a comfortable win in their third league match.

The very next day, Portlaoise took on UCD 6th in Kilkenny and unfortunately, with tired legs from the win over Weston on the previous day, UCD proved too strong for Portlaoise.

There was great play from many of the Portlaoise players including Liz Poustie in the right back position, Hazel Williams, in her first match for Portlaoise, and Emma Holohan, on the left-hand side of the pitch.

Portlaoise managed to get one score on the board courtesy of great work by the forwards and a lovely shot on goal by Kent, which made its way past the UCD goal-keeper.

However, UCD managed to score five goals throughout the game and won with a final score of 5-1. Next weekend, Portlaoise will take on Our Lady’s Templeogue in an away league match.

Even though the season has started, anyone who is interested in playing hockey is welcome to join training in Fr Breen Park in Abbeyleix on Tuesday nights at 7.30pm.