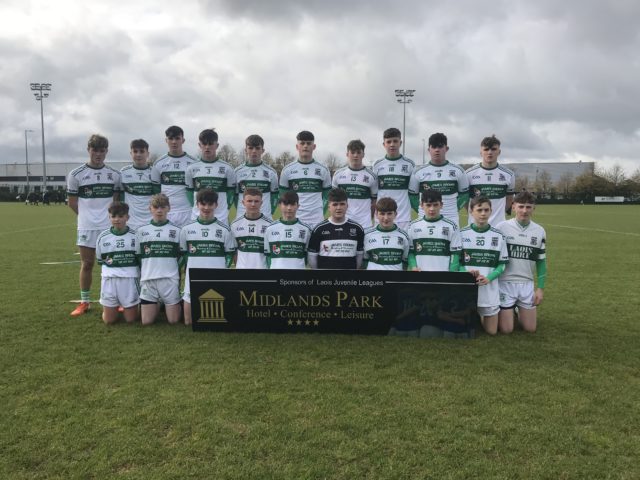 Portlaoise overcame Abbeyleix St Lazarians this afternoon in the U-15 hurling county final in the Laois GAA Training Centre.

Portlaoise fell behind in the opening minutes going 1-5 to 0-2 points down but clawed their way back to pull off a superb 13 point win.

Barry Fitzpatrick played a huge role tapping over 13 points for Portlaoise while giving a masterclass in free taking. James Conroy bagged an impressive 2-1 for the Town in the dying minutes.

Abbeyleix opened the game with a second minute point from Colin Byrne. That was soon cancelled out by a point from Sean Devitt.

Abbeyleix took the rains for the following minutes with scores from Killian Byrne, Jamie Carroll and a free from Byrne.

A Barry Fitzpatrick free was then followed by Jack McGrath raising the white flag for Portlaoise but Abbeyleix had the answers.

Liam Kavanagh rattled the Portlaoise net followed up nicely by scores from Kyle Mullen and another Byrne free.

Byrne popped over a free which was Abbeyleix’s last score of the half. Three monster frees from Fitzpatrick lifted the Portlaoise side before half time to leave Abbeyleix leading by two points at the break.

The second half saw Portlaoise take the reigns. Byrne opened the half with an Abbeyleix free but again, Barry Fitzpatrick stepped over the ball twice to plant two more frees.

It was an all too familiar scene as Byrne and Fitzpatrick taded back to back frees heading into the last 10 minutes to see Abbeyleix still lead by two points.

The final 10 minutes of the game belonged to Portlaoise. Two Fitzpatrick frees and a Jamie Callaghan point lifted Portlaoise to put them in the lead by a point but up stepped James Conroy to bury Portlaoise’s first goal.

The next six scores were in Portlaoise’s favour with two frees and a point from play from Fitzpatrick and a nail in the coffin in the form of a Jamie Callaghan goal to put Portlaoise ahead by 14 points heading into injury time.

Kavanagh closed the game with a free but it was all too late for the away side.