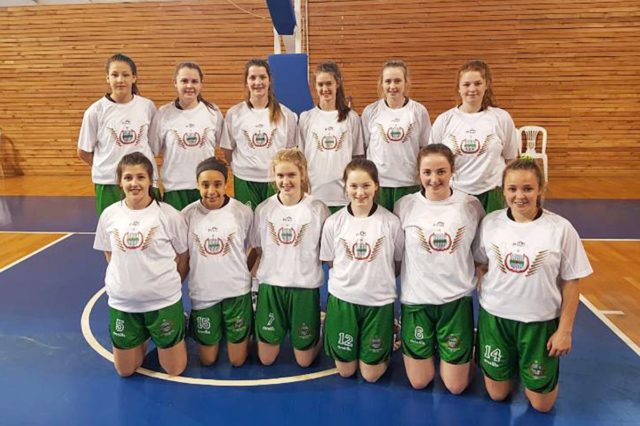 Scoil Chriost Ri Senior A Basketball team are through to the All Ireland Cup Quarter Final following an away win against Colaiste Mhuire Ennis.

They exploded out of the blocks with a powerful display of fast break-full press basketball which coupled with composed offence and prolific shooting which saw the Portlaoise girls score
37 points in the first quarter for an unassailable lead.

The team are showing the benefits of the experience of playing at the recent World Championships in Crete as well as players playing on International programmes and in the National League.

They now play the winners of Tullamore College and Colaiste Einde Galway in a home Quarter Final in November.

The Cadette A (U-16) team were beaten by a point on the road in their Cup game against St Paul’s Oughterard.

After a slow start to the game, they staged a brilliant comeback to go one point clear with 40 seconds remaining. A break away basket from the Galway girls to knock them out.

They got back to winning ways however in the Regional Championships with a win over Kilcullen.

The Senior A team made it a double over the Kildare girls and both teams play Clonaslee next week in the next round of games.

The Senior B team had a great 16 point win over Naas in the first Round of their Regional Championship but were pipped by Baltinglass by one point in second round.

They qualify for a home Quarter Final after the midterm break.

The school are fielding three teams in the Senior Championships this year.

Following a narrow loss to Mountmellick the Senior C team were beaten by a very strong Killina team.

They will now play in the Shield competition after the midterm break.

Also playing in the Shield competition after Mid Term will be the Cadette B team following losses to Naas and Baltinglass.

Meanwhile, the first and second year teams are in training for their Cups and Championships after Christmas.