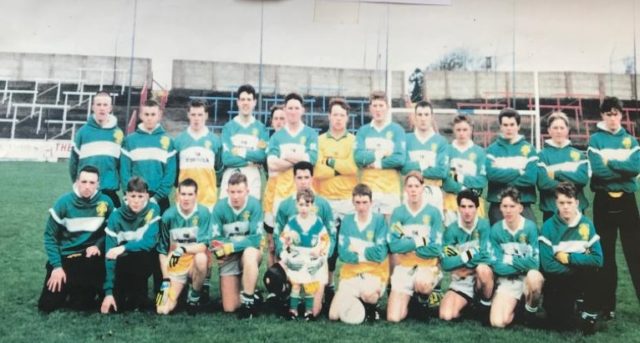 It remains one of the great underage county final shocks and 25 years on, Crettyard GAA are to mark their achievements of the club’s U-21 winning side from 1994.

They are holding a reunion in Behan’s Lounge this Saturday, November 2, at 8pm.

The U-21 grade has produced some great contests over the years but outside of Portlaoise, Portarlington and Graiguecullen the list of finals is populated mostly by amalgamated sides: Stradbally Parish Gaels; Sarsfields; St Joseph’s-Barrowhouse; Ballylinan-Gleannmor.

That makes Crettyard’s win in 1994 all the more impressive.

They were on their own, the small rural club fielding a panel of players that were exclusively Crettyard. And if that was an achievement in itself, going on to win it outright was even more so.

In early December they beat a star-studded Portarlington side in the final.

“Crettyard take title in thriller,” was the headline in the Leinster Express even if the 0-7 to 0-6 winning scoreline was typical of a match played in the depths of winter.

“The mighty fell last Sunday,” wrote the reporter in the Leinster, “as Crettyard carved their name on the U-21 FC trophy with an excellent team performance in a thrilling hour’s football.

“Portarlington, with such a formidable team who have a lot of experience at this level, were outplayed by a club only experiencing their third year in the competition.”

Laois had won the Leinster U-21 title in 1994 and Port were able to call on Hughie Emerson, already an established Laois senior player having made his debut in 1992, and Bobby Dorris, though they were without David Sweeney for the final who had also on that Leinster-winning team.

Crettyard had Jacko Murphy in their ranks, who had been on that Laois team too.

The sides were level 0-3 apiece at half time and though Pa Brennan put Crettyard into the lead with a free early in the second half, Colin Bennett hit back with a brace of points for Port to put them ahead for the first time.

But Brennan pointed either side of a Bennett free and Crettyard kept their noses in front to the final whistle.

“There were scenes of unbridled joy as the cup was presented to Crettyard captain Brian O’Sullivan,” added the Leinster Express report. “(This was) a remarkable and fully deserved achievement from a club which has put in hard work preparing this present panel from before minor level.

“This is a marvellous achievement for Crettyard.”

Behan’s should be hopping on Saturday. The video of the match is being shown at 8pm followed by a panel discussion, music and craic.

The two teams on the day were: