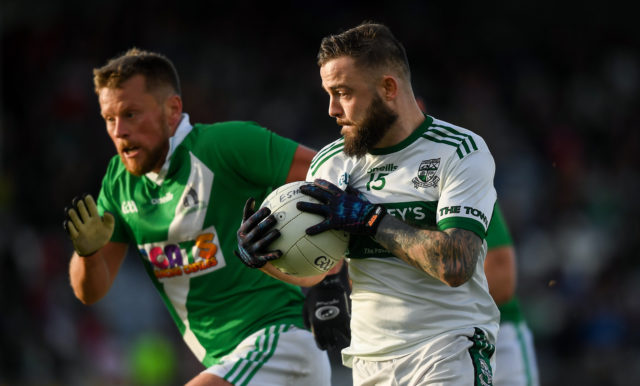 Portlaoise just came off the back of a dramatic win over Wicklow’s St Pat’s after a dramatic penalty shoot out in Aughrim.

And now, only Carlow’s Eire Óg stand in their way of a Leinster final.

As Portlaoise look to down the Carlow Rising, we’ve all the information you need below.

Portlaoise have had a slightly different season to the last couple of years this year as they were pushed hard by multiple teams but they showed character every time to come out on top.

Given the obstacles they’ve overcome throughout the season, they always found a way to win and those tests should stand to them in the Leinster semi final, especially after the drama in Aughrim when they needed penalties after extra time to see off Wicklow champions St Pat’s.

They stepped up when asked and showed exactly why they’ve gotten to this point.

Gary Saunders is expected back to full health after a brief illness.

There are hopes of Paul Cahillane making another cameo like in Aughrim where he came on the field, scored a vital point but had to head to the bench as injury took over.

They will be reliant on leadership and consistency of Laois footballer of the Year, Kieran Lillis as well as the usual reliable suspect, Bruno McCormack.

Portlaoise have strength in numbers with their bench making huge impacts on every game this season.

Saunders, Ronan McEvoy and Damon Larkin are all expected to feature again, possibly from the start.  The introduction of Graham Brody changed the game and added threat in Aughrim and the big talking point will be whether he will start his first game of the season.

Having gotten them to this point through the fifth penalty, Craig Rogers is also a vital part of this team.

Eire Óg are a strong side. There is no way they can be overlooked and Portlaoise will have to be very clinical in their approach to the game.

They are three in-a-row Carlow senior football champions thanks to the likes of Recce Denieffe, Cormac Mullins and free taker Chris Blake.

They’re a strong and physical outfit who, like Portlaoise, can introduce talent from the line. Niall Quinlan was introduced in the county final against Palatine in the 48th minute and secured four points to his name, three being frees.

There is no doubt it is a good match up and should make for an entertaining game.

Longford referee Patrick Maguire is the man in charge.

Who are the favourites?

Portlaoise are slight favourites at 4/5 while Eire Óg are 11/8.

As well as the LaoisToday Live Blog, the game is live on RTE 2 with commentary also available on Midlands 103

SEE ALSO – The view from Carlow: Eire Og tradition, Laois links and remembering that great team of the 1990s