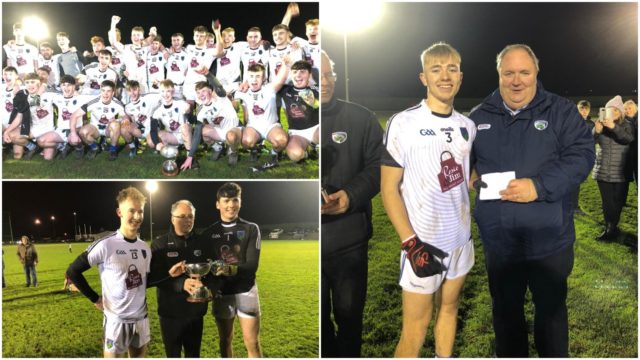 Courtwood-Emo are the final winners of a championship in Laois for 2020 as they had to dig extremely deep to defeat Portarlington in the U-20 final in Stradbally tonight.

Michael O’Connell’s side just about got over the line following a simply brilliant game of football that had absolutely everything.

Both sides enjoyed purple patches at different times but in the end it was Courtwood-Emo’s strong finish to the end of the second period of extra time that saw them run out two point winners.

Defences were really strong throughout with man of the match Sean Greene excelling for Courtwood-Emo along with Seth Mooney Burns and Paul O’Flynn while Alex Mohan, Cathal Bennett and Eoin Kennedy were brilliant for Portarlington.

There was very little between the teams for much of the contest and that was very much the case in the first half.

Portarlington began with points from Daragh Galvin and Sean Michael Corcoran but they were cancelled out by Rory Doyle and Niall Dunne after 10 minutes.

Portarlington dominated the next 15 though as Corcoran, Colin Slevin and substitute Jordan Fitzpatrick edging them 0-5 to 0-2 ahead.

But back came Courtwood-Emo who drew level on the stroke of half time with a brace from Alan Kinsella and another from Niall Dunne.

However, Portarlington would take a one point lead into the interval thanks to a late Rioghan Murphy score from distance – 0-6 to 0-5 at the break.

But Courtwood-Emo came flying out of the traps in the second half with Niall Dunne and Jack Owens raising a white flag each to give them the lead for the first time.

Sean Michael Corcoran levelled it but a brace of Niall Dunne frees along with a monster from Matthew Byron gave Courtwood-Emo a 0-10 to 0-7 advantage after 40 minutes.

Colin Slevin ended the Courtwood-Emo scoring spree but the leaders then had the chance to wrap up the game when Padraig Kirwan found Alan Kinsella who unleashed a thunderbolt of a shot which cannoned off the underside of the crossbar and somehow stayed out.

The ball came back to Jack Owens but his shot was marvelously blocked by Alex Mohan on the line with Port working the ball back down the field where Daragh Galvin cut the gap to one.

Daragh Galvin then levelled the game before Port made it five points in a row with scores from Ronan Coffey and Colin Slevin to leave them 0-12 to 0-10 ahead after 53 minutes.

Portarlington then had the chance to put the game beyond Courtwood-Emo when Rioghan Murphy released sub Ceilum Coughlan-Maher one-on-one with Niall Gorman but the teenager’s shot just went wide of the post.

And Courtwood-Emo made them pay for that miss as Sean O’Flynn picked out joint-captain Rory Doyle who cut inside on the 14 metre line and cracked a shot into the top corner of the net.

It looked like they would hold on to win but then in injury time, Ronan Coffey nailed a free from an acute angle to send us to extra time with the score at 1-10 to 0-13.

The first half of extra time was cagey enough with Sean O’Flynn pushing the amalgamated side ahead before Port took over again.

Ronan Coffey squared the game before Sean Michael Corcoran left Portarlington 0-15 to 1-11 ahead at the interval.

But once again Courtwood-Emo started a second half like a train with Cian Doyle slotting over from distance before Laois Minor Player of the Year Paul O’Flynn gave them the lead again.

Curtis Lyons regained parity for a final time after 75 minutes but two late Niall Dunne frees did the trick for Courtwood-Emo as Portarlington could not muster a fight back.

Proposals are in place to bring this grade back to U-19 next year and if that is the case, the one and only U-20 ‘A’ final to be played in Laois was certainly a fitting one.