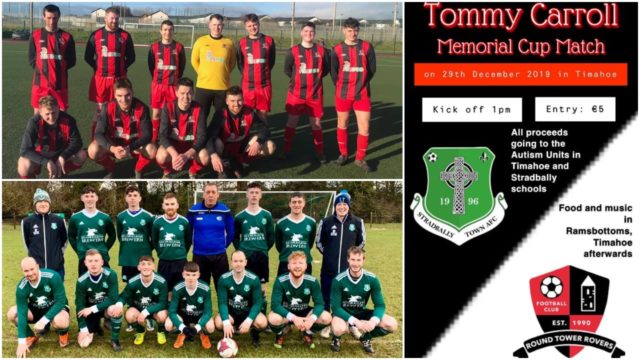 Neighbours Round Tower Rovers, of Timahoe, and Stradbally Town will go head to head in Timahoe at 1pm.

The Parish Cup, named in honour of the late Tommy Carroll, will be up for grabs.

And the two clubs have come together to play the match as a fundraiser.

All proceeds raised from the game will be donated to the Autism Units in both Timahoe NS and St Colman’s NS.

Stradbally Town play in the Combined Counties Football League and enjoyed a brilliant 2019 as they won the Division 2 Cup and reached the John Farrell CCFL Cup Final for the first time in their history.

This season has seen them field two teams with their A side playing in Division 1 while their B team are in Division 3A of the CCFL.

After being formed in 1990, Round Towers Rovers disbanded in 2008 but returned to the playing field in September 2018.

Manager Brian Oxley and chairman Damien McArdle reignited the club with the help of John Quigley along with the former members of the original Round Tower Rovers FC trustees, of Pat Smith, James Daly and Padraig Culliton.

Round Tower Rovers returned with an U-18 team in 2018 and entered the Carlow League.

They remained in that league this season but have now got a senior side who are in Division 2.

Entry to the game is €5 and food will be served in Ramsbottom’s Bar in Timahoe after the game with live music also.