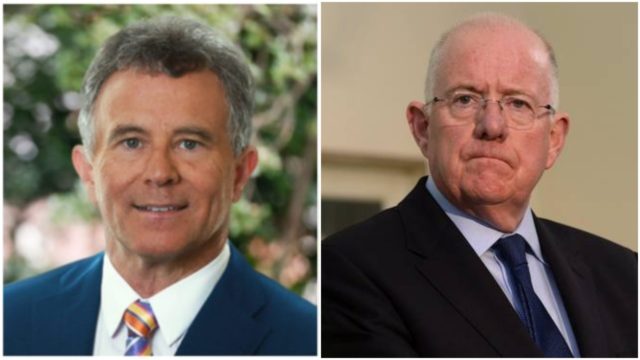 Fianna Fáil never agreed to next week’s event to commemorate the RIC insists Laois-Offaly TD, Seán Fleming who says “Fine Gael have gone off on a solo run on this one”.

Deputy Fleming told Laois Today that he is not going to attend the controversial commemoration in Dublin Castle next week. He added that the disagreement and the manner in which the issue is being handled by the Government is fueling the mounting tensions between the two main parties.

The long serving and senior member of the Fianna Fáil parliamentary party refrained from directing any criticism at his constituency colleague and opposite number, Justice Minister Charlie Flanagan, who by the nature of his portfolio finds himself in the eye of the storm on this one.

However, Deputy Fleming who cited strong grounds and a series of reasons why he personally would not be accepting the invitation to the RIC commemoration said he was appalled at the vilification and personal abuse being levelled against Minister Flanagan across social media. “We have a stark difference of opinion on this but that’s not on,” said Deputy Fleming in relation to the online abuse of the Laois Minister.

But significantly, Deputy Fleming is adamant to clarify that his Party never agreed to, sign-off on or approve the RIC event, even though there is an All-Party Oireacthas Committee designated to do just that.

“Let’s be clear about this, I will not be attending and this event shouldn’t be happening at all. It was not agreed by us (Fianna Fáil) even though there is an All-Party Committee set up on these matters for the Decade of Commemorations.

“They were supposed to meet before Christmas to agree the schedule of events for 2020 but the meeting never happened and the Government went ahead and ploughed ahead anyway. The first we heard of it was when it was announced and the invitations went out,” insists the Laois based TD.

The Fianna Fáil members of the All Party Committee he said are Senator Mark Daly and two of their TDs, Eamon O’ Cuiv and Niamh Smyth.

“This is a solo run by the Government, a small group pushed this through and I’m not going to it. I’ve no doubt they will press ahead and it will go on and they will fill the empty seats with plenty of Fine Gaelers and those with a lineage back to those who opposed Irish independence of that time, as there are still plenty of them around.”

Deputy Fleming also took umbrage and said the comments yesterday of the Taoiseach, Leo Varadkar were not helpful when he described the mounting opposition to the RIC event as a “boycott”.

“I didn’t like that, it wasn’t helpful. People are entitled not to go if they don’t want to. It is a personal decision, I’m not suggesting what others might do, it’s up to themselves and there is no overall Fianna Fáil position or any kind of dictate, so it’s wrong to liken it to a boycott.

“I understand that it’s a long time ago and there are those who will wonder what all the fuss is about but it’s hard to know where you are going if you don’t know your history and where you have come from.

“The Government are now using the ‘Nurmberg Defence’, that the RIC and others were only following orders, but that’s not good enough,” maintained Deputy Fleming referencing the post-World War 2 Nazi trials.

“I know some people could say this is a return to ‘Civil War politics’ but it does heighten the tensions between the two parties and there’s no point in saying otherwise. I wouldn’t expect too many of the Fianna Fáil Party to attend this event, but there is no Party position and it’s up to everyone to make up their own mind.”

And in a telling insight as to the nuances, complexities and sensitivities of such commemorative centenary events Deputy Fleming revealed that while his eldest uncle Mick Fleming served in the RIC in Rathdrum in Wicklow that their family home in the Swan was regularly raided and ransacked by the RIC. He said the same RIC were in direct command of the reviled Black and Tans.

“My grandparents and my aunts and uncles had to reinforce the jams and hinges of the doors to try and barricade the door with steel reinforcements to prevent these raids in the middle of the night. They are still there at our family home in the Swan, daily visual reminders of what I am talking about.

For the record Deputy Fleming felt it was important to note that due to the often vile conduct of some members of the RIC and Black and Tans in their command many members of the RIC could not condone or continence such conduct which led to the mutiny of over 1,000 members of the Force, starting in County Clare. Deputy Fleming’s uncle Mick was one of those who quit the RIC at that time, later to join the Gardai on the foundation of the fledgling State. His father, John, also joined the new Garda force at that time and served for a number of years in Cork, before returning to the Swan.

To further compound the divisive nature of the times, two of Deputy Fleming’s other uncles, Eamon and Paddy, also fought on opposite sides in the subsequent Civil War, which itself remains to be commemorated over the next couple of years.