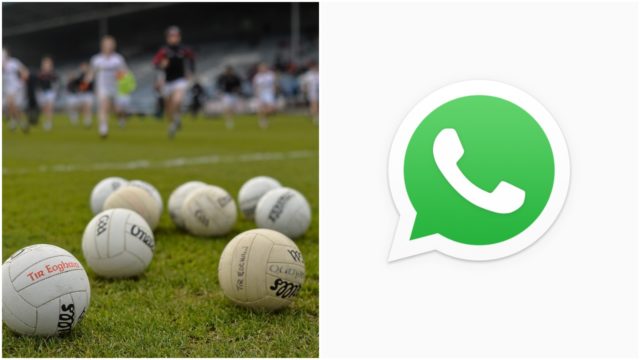 The use of WhatsApp to communicate within clubs is prohibited by the GAA, it has been revealed.

In a document distributed to clubs in Laois recently, the problem with using the app to communicate messages to teams appears to relate to apparent breaches of GDPR.

This is outlined in the GAA Social Media Guidelines.

Page 20 of the document outlines why WhatsApp is not approved by GAA for any official correspondence for GAA purposes.

It states: “From a GDPR perspective WhatsApp is not compliant when used for official communications

“This is due to a number of reasons. Firstly, if a Whatsapp group is set up (U-12 hurling for example) every parent in that group has their phone number and possibly profile photograph if they have one, shared with every other parent in the group without giving their consent for their personal data to be shared in this manner.

“Also, the lack of auditing ability the Club/County has over a Whatsapp group is an issue.

“This is an issue for a number of reasons outside of GDPR and data protection also. For instance, if a parent in a Whatsapp group were to post unsuitable material to the Whatsapp group, and then leave the group, the administrators of the group cannot remove such material.

“The lack of auditing ability also makes it difficult to comply with a Subject Access Request or request for deletion if one were received.

“Along with the above, there is an issue presently with Whatsapp as to the location of the storage of information within it.

“If personal data is transferred outside the EEA, the entity transferring it (the Club/County) will have to ensure additional safeguards are in place which is not possible when using Whatsapp.

“Therefore due to these reasons, the use of Whatsapp in an official capacity is not advisable.”

A GAA spokesperson said: “Any contact, be it with parents of under 18’s or adults within the GAA community is to be completed by a club/county/committee in an official manner and the use of WhatsApp should therefore be terminated.

“All clubs and officials within Laois GAA should be made aware of this issue.”

He said: “I can’t stress it enough – you have to scrap WhatsApp.”

Mr Lahart also revealed that the GAA were in the process of bringing out an App that could be used for communications which should be operational in late February.

But for now, clubs are being instructed to revert back to text messaged. 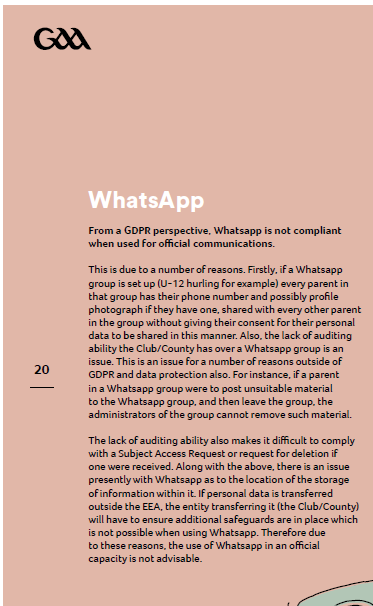