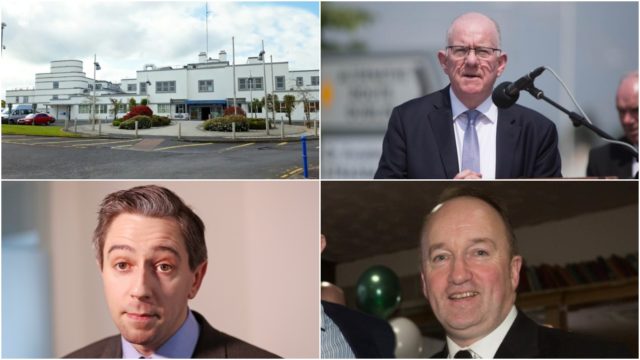 The main local group behind the campaign to save Portlaoise Hospital have launched a scathing attack on Laois-Offaly TD and Minister for Justice Charlie Flanagan and his colleague, Minister for Health Simon Harris.

Portlaoise Hospital Action Committee (PHAC) have voiced its “extreme disappointment and frustration at the lack of definitive action” from Ministers Charlie Flanagan and Simon Harris in respect of securing the future for the Midland Regional Hospital Portlaoise.

“On the back of a successful campaign to thwart the immediate down-grading of the hospital and the publication of Susan O’Reilly’s flawed report two years ago, our Committee has been waiting for our Minister and the Minister for Health to deliver on their promises to engage with the stakeholders of the hospital in Portlaoise and to remove the threat of a down-grade to the hospital.

“The clinical community waited for Simon Harris to, as he put it: ‘directly engage with them’.

“PHAC waited for the consultation with the stakeholders which had been promised.

“PHAC waited for a meeting with Minister Harris. It’s two weeks out from a General Election. We are still waiting!”.

“In spite of recent pronouncements from Minister Flanagan to the contrary and providing fresh reassurances that ‘good news’ was imminent and that Minister Harris would meet with a delegation from the PHAC ‘in the next week’ nothing has happened.”

Committee Chairman Tommy Timmons was equally scathing in his attack on the Minister; “The abject failure of our ‘own’ Minister, Charlie Flanagan, to deliver for the Hospital despite sharing a Cabinet table with Minister Harris for the past number of years is nothing short of a disgrace.

“The Minister spoke on the podium at the Light for Lives rally in Portlaoise just over two years ago and promised the people of Laois and surrounding areas that the hospital would be saved.

“He has not delivered on that promise.”

The Committee had hoped that promises made over the past two years to scrap the HSE Report that recommended down-grading the hospital and to engage with the stakeholders to provide a roadmap for the future development of the hospital and the retention of services, especially the 24/7 Accident and Emergency Department, would prove fruitful, particularly in the run up to the General Election.

“Those hopes would appear now to be dashed,” continued the statement.

“The Committee is urging voters in the up-coming election to think carefully about whom they vote for; “Vote for Action, Not Empty Promises is the message”.

On Monday, Minister Flanagan issued a statement saying that he had received a letter from Simon Harris with “his commitment to services at Midlands Regional Hospital, Portlaoise”.

“He has absolutely confirmed that if Fine Gael are returned to Government, there are no plans and will be no plans to reduce capacity in the Hospital.

“This restates the commitment I have already given.

“As both TD for this area and Minister for Justice & Equality, I have worked really hard for Midlands Regionals Hospital Portlaoise, which remains my number one priority. I have secured additional investment such as:

“I am delighted that the letter I received today from the Minister for Health absolutely confirms the assurance he gave me before Christmas that the proposed reconfiguration of services was now overtaken by Slaintecare and there would be no reduction in capacity.”