This is farming country. Fields, cows and sheds everywhere you look.

Seán is biding his time. A man in a big machine pulls up to shake hands and wish him the best of luck. Seán is well known.

“I try to do a school every day. It’s a great chance to meet people, parents with young families, they’ll be here for 3 to pick up the children.

“They’ll be sitting in their cars, on their mobiles, the days of reading the paper or a magazine are gone. You’ll only have a few minutes, once the kids come out, they’re gone.”

Sure enough, coming up to 3 o’clock a line of cars forms on the side road alongside Clogh National School.

Right on cue, two other men show up. These boys know their patch and everyone in it. Local knowledge. You can’t beat it.

The canvass commences. The lads know everyone by first name. They are the chairman and secretary of the local Fianna Fáil cumann. 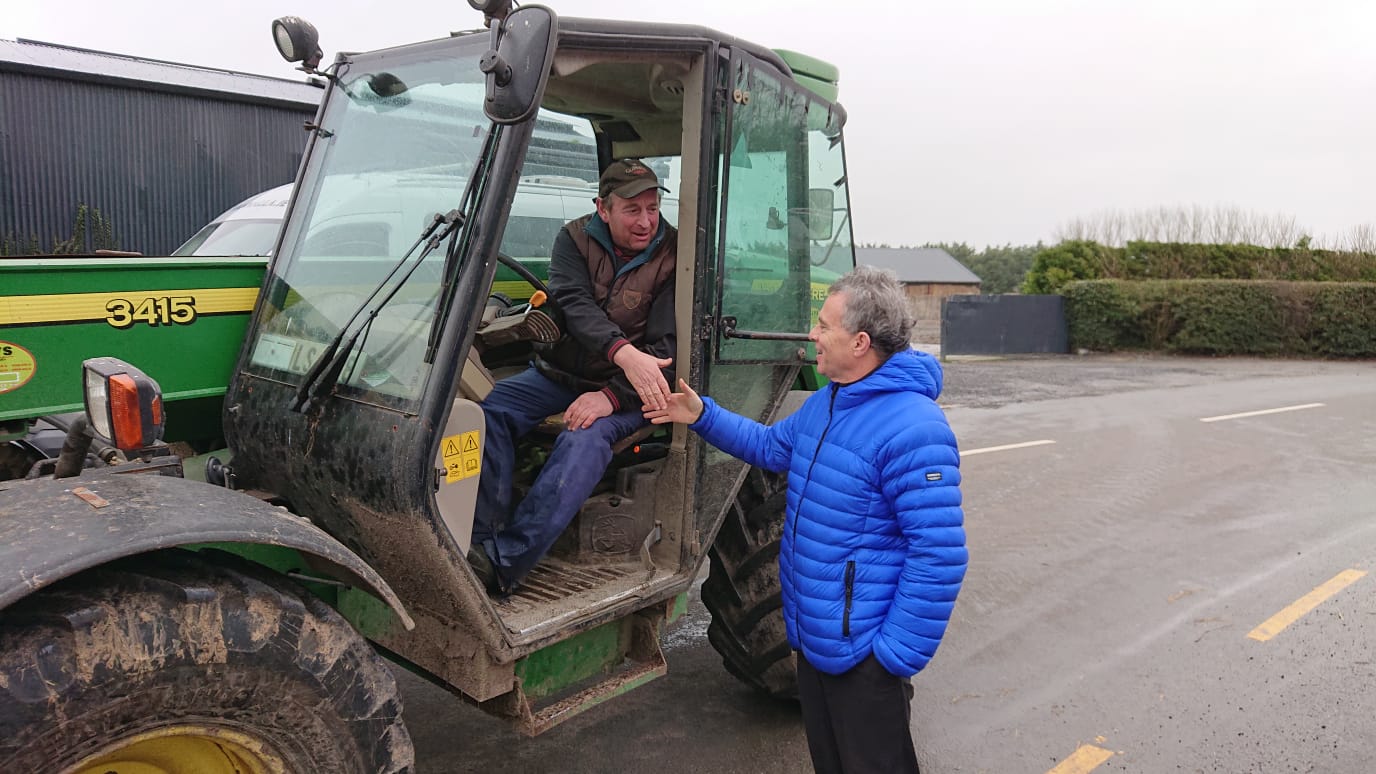 There are parents and grand-parents in the queue of cars waiting to give the children a lift home. The school bus at the main gate collects the remainder of the 82 children which go to Clogh NS.

The delays in assessments for children and the cost of having to go private; both parents working, paying the high rate of tax but still forking out for dental and orthodontic treatment; the poor supports for those with disabilities all come up along the line.

“Don’t talk to me, don’t I know, Laois is the worst in the country for the delays. It’s shockin’ the HSE can’t recruit the staff, it’s terrible,” Seán feels their pain. The delays in dental care have been going on for years he says.

“Just because me father voted for ye, doesn’t mean I am,” warns one mother with a car full of kids. Every day is a school day.

“That day is long gone, you just wouldn’t know how anyone is voting anymore,” nods Martin Bergin ruefully. Local knowledge just isn’t what it used to be.

We’re headed for Borris. The Bergins bid us farewell. Their work here is done and are off back to their farms. There are cows calving.

The motorway passes nearby as we head for Borris-in-Ossory.

Borris is bleak. It looks like everything else has passed by as well.

In Borris, a woman waits in the spitting rain for the Local Link bus. There isn’t even a bus shelter.

The Leix County is in a terrible state. It’s a woeful eyesore on the corner. 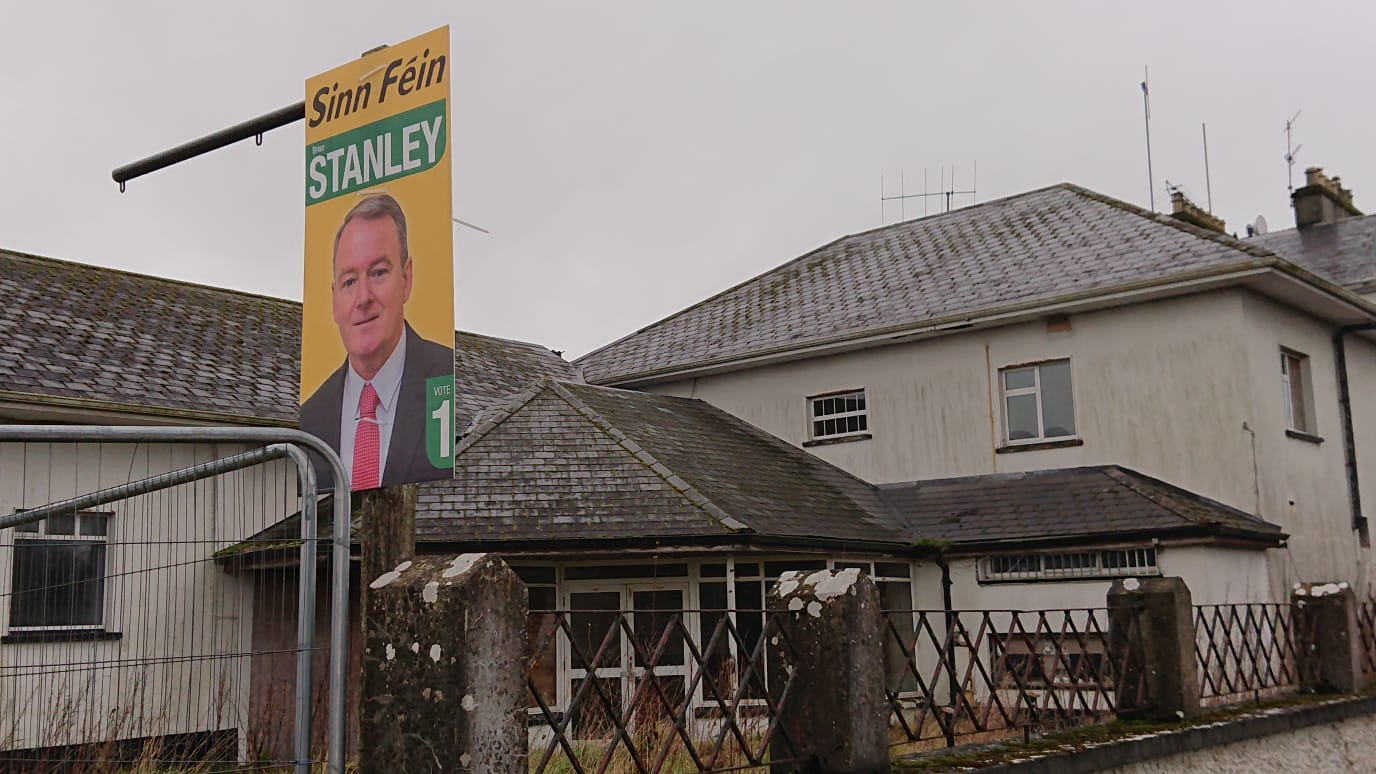 Deanswood the housing estate down the road is literally falling down. It’s not even categorised as a ‘ghost estate’ as none of the houses were ever even occupied. Apparently built on a swamp.

A bulldozer will be the only solution. Dream homes that turned out to be a nightmare. A stark reminder of the property boom and banking bust that went so sour only a decade ago.

Borris still bears the scars, these abandoned houses with their smashed windows, derelict doorways, and collapsed roofs like the face of a worse-to-wear down and out, worn out, tired, not a tooth in its head. The row of empty dwellings are hard to fathom in the middle of a housing crisis and homelessness scandal. 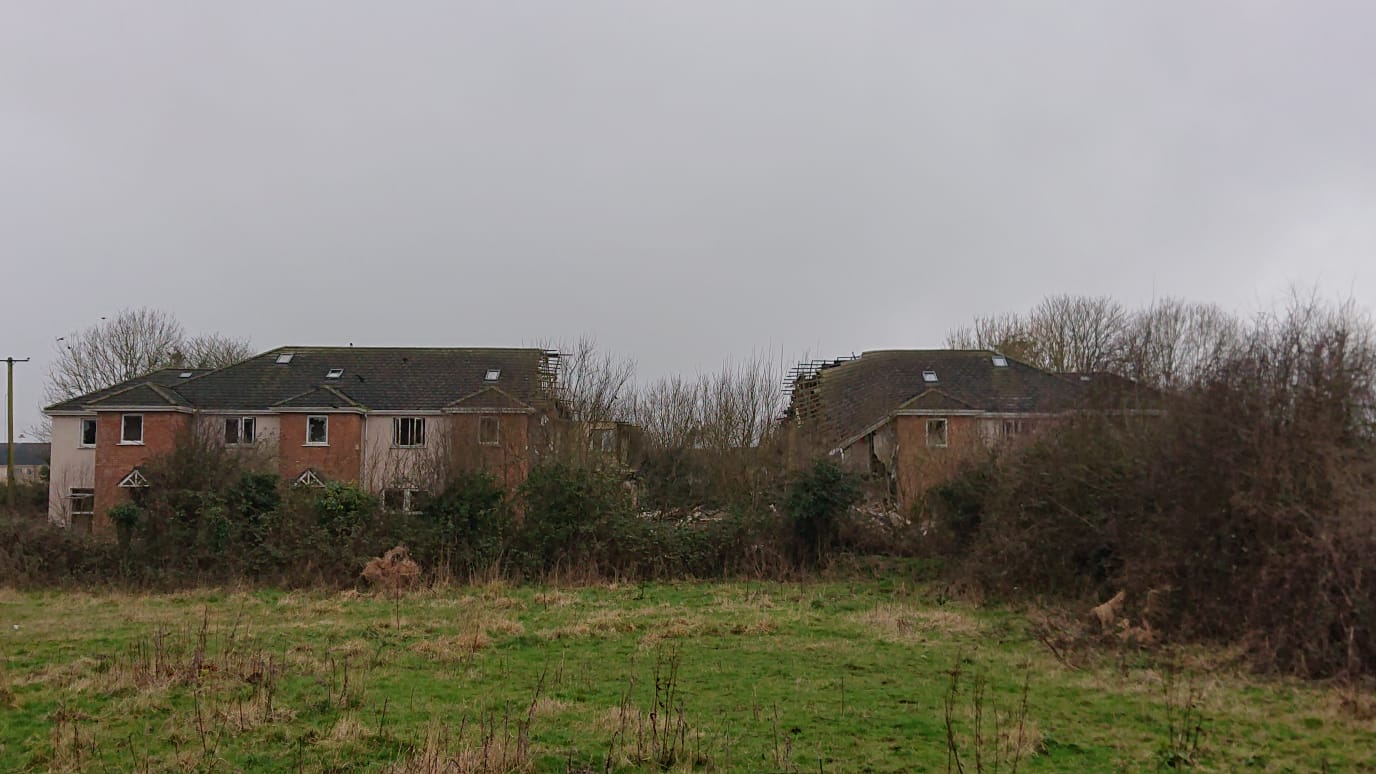 The phone rings in Seán’s car. It’s Donal Kelly from Portlaoise offering to help out with the canvass as he’s finished up work early.

Seán advises Donal to ring John Joe, as the Abbeyleix councillor is co-ordinating the team for this evening.

Seán canvasses St Patrick’s Terrace and Slieve Bloom View on his own. He needs little help here. Everyone knows him and he knows them, a word for everyone.

“That was a good canvass,” Seán is pleased, a rare glimpse of confidence.

Right on time his wife Mary arrives. She is accompanied by John Phelan, a Borris man, chairman of the local cumann.

Mary too knows the campaign trail inside out, ever since Séan was elected on his first run for the Dáil in back in 1997. The outgoing chairman of the Public Accounts Committee has added to his vote haul in every election ever since.

Mary takes a break for a quick cup of tea in the garage. John Phelan takes charge. He takes us out the main road towards Derrin. Farmhouses. He knows these fields and these families like the back of his hand; seed, breed and generation. Local knowledge. 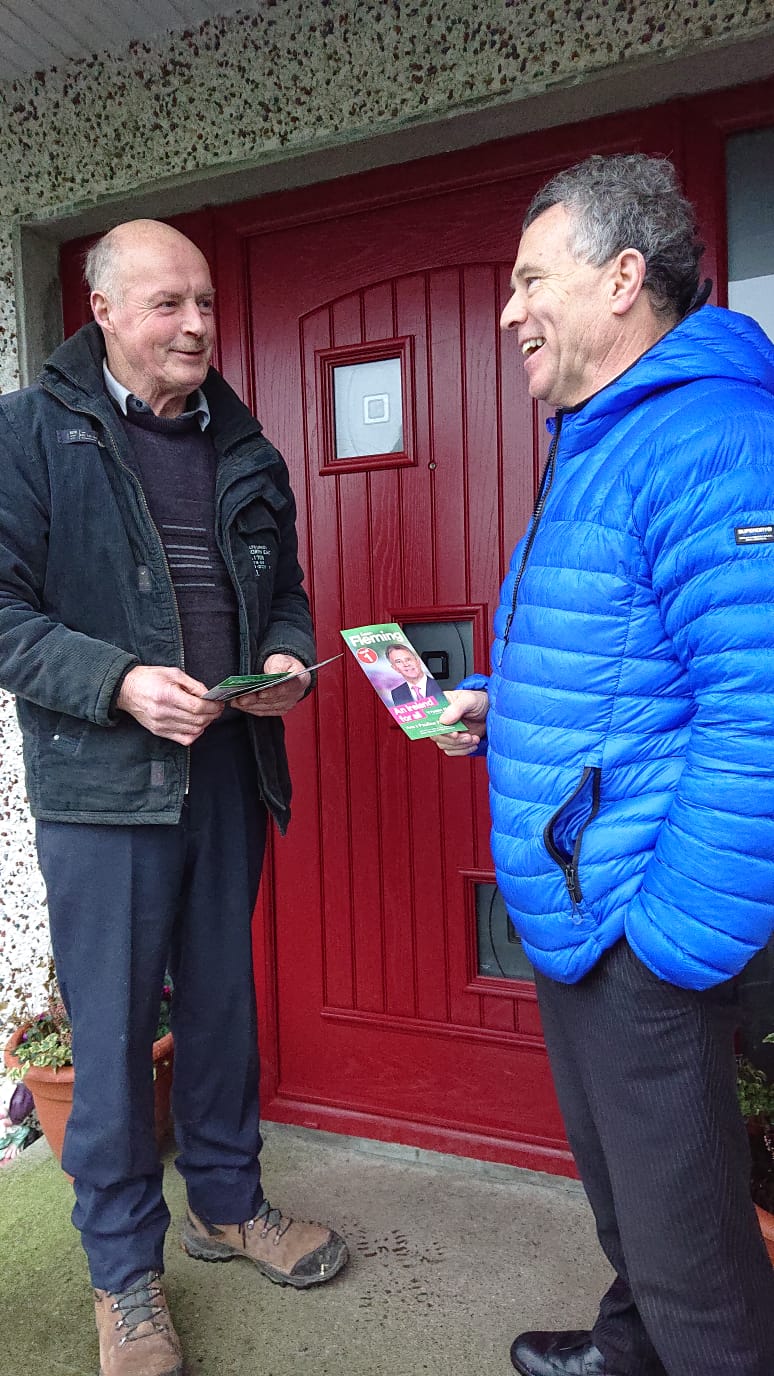 Elsewhere Seán’s politically savvy brothers Pádraig, Leo, Jim and Brendan, who co-ordinates it all, are busy on the canvass elsewhere. They are able to cover a lot of ground this way.

If Fianna Fáil are the Soldiers of Destiny then the Flemings are its crack unit, its commandos; a lean, mean, canvassing machine.

Don’t be surprised if Seán tops the poll. A Minister for Castletown maybe?

Correction: In an earlier version of this report we incorrectly stated that the pub in Clogh is closed. That is not the case and we sincerely apologise to the proprietors, Marian and Seán Hyland. ‘Mary’s Bar – Foxrock Inn’ is open and trading successfully as a pub and a B&B. Laois Today regrets any confusion or inconvenience. 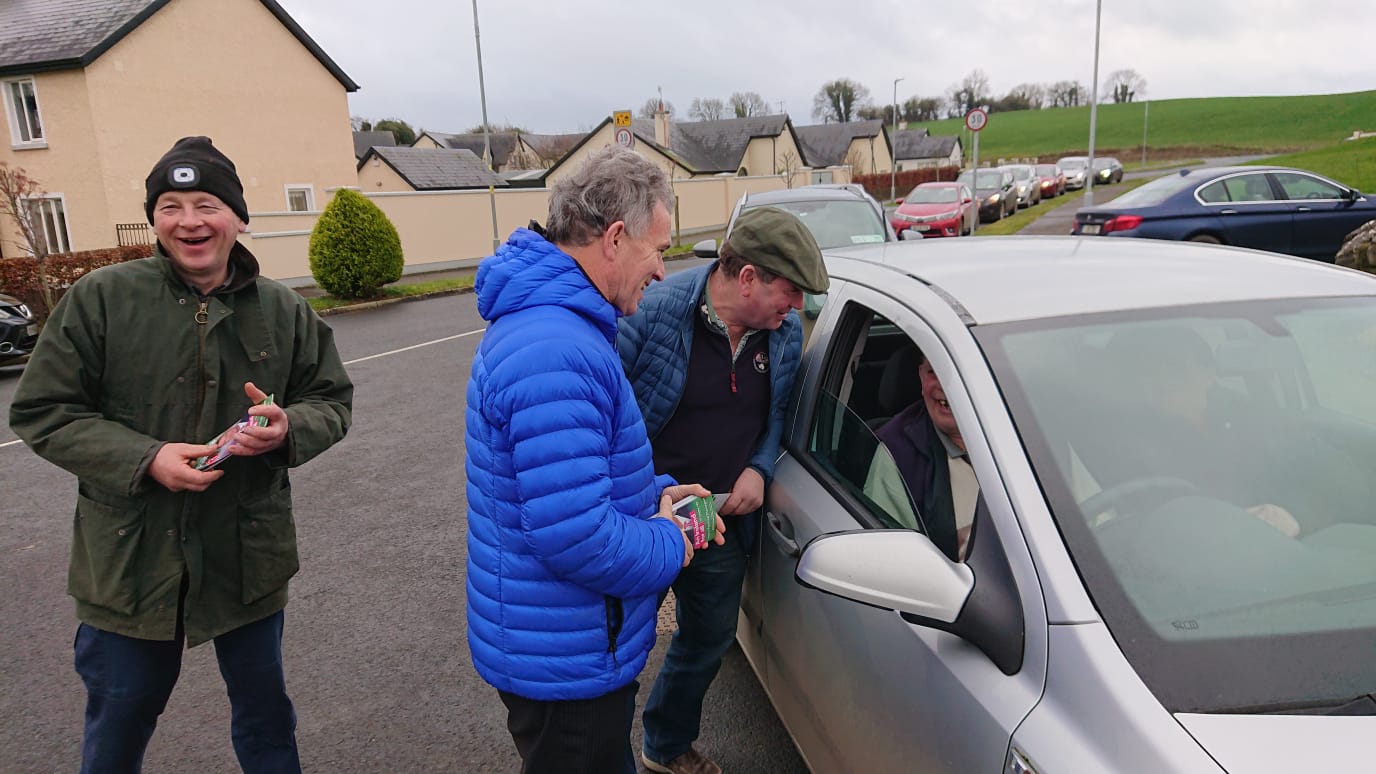