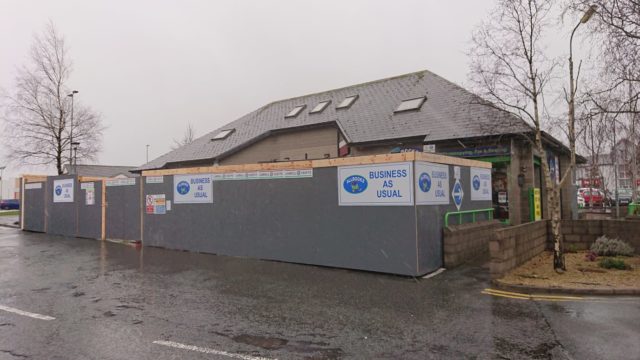 While there is a generally warm welcome for the news that the public toilets in Portlaoise are to be finally renovated and re-opened, not everyone is happy with how the works are being carried out.

The public convenience in the county town have been closed for a couple of years now and their re-instatement has only come about due to constant and ongoing pressure from local councillors.

Work are now underway to restore the public loo in Lyster Square and will take 16 weeks to complete.

There will be some inconvenience in the meantime so as to provide the new public convenience.

Most discommoded by the three months of works which got underway on February 10 are drivers who rely on using the designated disabled parking spots, which have now been blocked off by a construction hoarding.

The issue was raised by Cllr Noel Tuohy this week. He has been one of those pushing for the restoration of the public toilets. He said he was delighted that they are to be re-opened and is glad to see the work finally underway.

However, Cllr Tuohy said that it is unfortunate that part of the impact of the works was the loss of the two disabled parking bays. He said the drivers that need them as familiar with their location. He urged the local authority to provide two nearby alternative disabled parking spaces in the interim.

Director of Services, Mr Simon Walton said he was amenable to providing alternative disabled designated parking spots in the vicinity, while the works are ongoing.

He further outlined that the new toilet facility will consist of two single male/female units, both universally accessible. The overall footprint of the toilet facility will be reduced by comparison to the previous toilet facility. The surplus available floor space will also be refurbished and will be given over to local community uses such as Portlaoise Tidy Towns or similar.

The new toilets are expected to be available by the end of May.

Cllr Willie Aird confirmed that he has received “a huge amount of flak” over the way the Council had gone about the works, including the loss of the disabled parking.

“It should have been a far better PR exercise, the shop there (All Books) was completely blacked off and the signs saying they were open for business had to be put up on the hoardings afterwards. If I was in business or trading there I’d be really annoyed,” said Cllr Aird.

All Books in Lyster Square is continuing to trade and open for business as normal for the duration of the works.

Cllr Caroline Dwane-Stanley said that the imminent re-opening of the toilets was most welcome particularly as they were closed unilaterally without any reference to the councillors and they were initially told they could not be re-opened.

“It’s been a long fight and a huge inconvenience,” she said.

Cllr Catherine Fitzgerald confirmed that at first they were told it wasn’t possible to re-open the toilets but that the newly arrived Director of Services, Simon Walton had listened to them and responded positively to their requests.