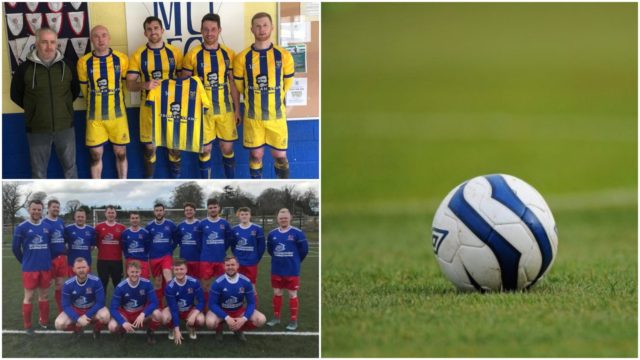 The weather was the winner again this weekend as a number of games fell victim to it today.

Just a handful of matches were played in the CCFL, Carlow league and Kilkenny league involving Laois teams.

We have reports on big wins for Mountmellick United and Round Tower Rovers as well as a narrow defeat for Stradbally Town.

Mountmellick United are through to the quarter final of the Combined Counties Cup after a hard fought win over Athlone side Ballinahown this morning.

With most pitches across the country waterlogged, this game was played on the astroturf in Athlone IT.

Mountmellick dominated this game from the off and duly opened the scoring when former Laois footballer Darren Strong rattled the net with a bullet header.

But against the run of play, the hosts were awarded a penalty before half time which they converted to make it 1-1 at the break.

However, on the hour mark, Mountmellick regained the lead when Robbie Hibbitts burst down the wing and crossed to Shane Dowling who volleyed the ball into the corner of the net.

Stradbally Town travelled to Birr Town this morning in the second round of the Counties Cup – a competition they reached the final of in 2019.

On a fantastic surface Stradbally started brightly and really dominated the opening exchanges.

Some great attacking play down the left wing got Colin Beale away who’s measured pass was brilliantly struck by the oncoming Benny Lawlor who deservedly put Stradbally 1-0 up.

Stradbally continued to have the better of the opening exchanges but couldn’t find that second goal with the Birr Town keeper making a couple of good saves.

On 35 minutes, Birr Town broke down their left wing and the cross found the right winger who finished neatly to the bottom corner. That was the last real action of the half and still all to play for with the score at 1-1.

Birr capitalised on a defensive mix up in the first minute of the second half to take a 2-1 lead. They went on to dominate the next 20 minutes and deservedly got their third goal just after Stradbally Town missed a fantastic chance to make it 2-2.

This seemed to finally spark Stradbally into life in the second half and they began to dominate again creating chance after chance.

Despite thier best efforts, Stradbally couldn’t get the equaliser having a couple of efforts shave the wrong side of the post in a frantic final few minutes.

Despite the loss, Stradbally gave a great account of themselves against a Birr Town team fighting for honors in the top division of the CCFL.

A blistering performance this afternoon from the Round Tower Rovers faithful saw them earn a resounding victory against a youthful Vale Wanderers.

Rovers took the lead within the First 10 minutes when ex Birmingham City and Shamrock Rovers veteran Sean Francis found the back of the net with a cool finish on his RTR debut.

Rovers kicked on from this and a long ball from the keeper Conor Hanley played Francis in behind the defence and squared the ball to Conor Whelehan for a tap in.

The Timahoe men again pushed on and on the half hour mark they earned a penalty. Colum Dunne took the spot kick but his effort was saved well by the Vale number 1.

Dunne redeemed himself immediately as he tapped in from close range after Mick Kennedy helped flicked a ball across the box from a corner.

Rovers were in dreamland and extended their lead to four when Paddy Brady got on the ball from a Francis cross, and had no problem drilling the ball home.

The second half began in the same fashion and saw Rovers go five in front. Mick Kennedy played a delightful through ball in over the top that allowed Whelehan to smartly finish picking up his second of the game.

The RTR defence and keeper held strong for the most part but were unlocked late on and saw Vale add two onto the score sheet in the remaining 15 minutes.

Whelehan should have had his hat-trick wrapped up only for his effort to smash out off the woodwork.

Overall a fantastic performance from the Rovers men heading into the final third of the season.