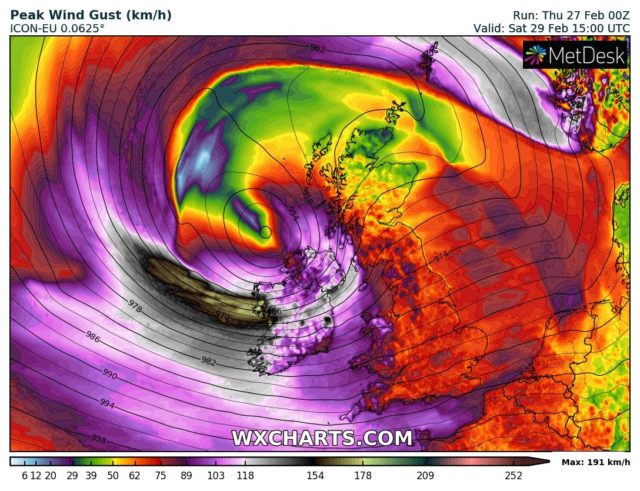 Local forecaster, Alan O’Reilly of Carlow Weather, predicts that another storm is on its way to Ireland.

The storm is predicted to hit this Saturday February 29 and bring strong winds, more rain and even snow as it crosses the country.

Alan said: “ECMWF continues to bring the storm towards us with a risk of strong to damaging winds and heavy rain with snow on the edge of the system.

“The Spanish met service have named Storm Jorge for Saturday. Will be interesting to see if same name is used here.”

Alan goes on to mention “However GFS also continues to keep system further south with strongest winds missing most of us, still heavy rain though.

“I’d usually side with ECMWF so keep an eye on forecasts over coming days.

“Looking at rainfall for next 7 days on both models shows risk of over 50mm in parts of the West which would make flooding worse again.”

Cathal Nolan from Ireland’s Weather Channel has issued a statement about the upcoming storm:

“Another weekend, another storm! Following quickly in the footsteps of Storm Ciara and Storm Dennis we have another storm depression to contend with this coming weekend.

“Virtually all of the weather models are in good agreement about the potential for a damaging storm developing through Saturday across many parts of the country, with all areas likely to experience damaging winds for a time.

“The storm will bring severe winds to many areas with gusts along the west coast reaching up to 140 km/h, possibly higher in exposed coastal areas, while further inland winds are likely to reach between 100 – 120 km/h.

“As well as the damaging winds there is also likely to be some heavy falls of rain at times between Friday and Sunday, with rainfall totals during this period likely to range between 40 – 60 mm across southern, western and north Midlands areas.

“This will lead to a worsening of the current flooding crisis across the Midlands of Ireland with river levels reaching new peaks between Sunday and Tuesday.”

Met Éireann warns: “Prepare yourself in an appropriate way depending on location and activity.

“All people and property in the affected areas can be significantly impacted. Check your activity/event and delay or cancel as appropriate.”

They are preparing to issue orange and yellow weather warnings.

Joanna Donnelly told the Irish Times: “As Saturday progresses and the storm centre moves closer to the country and pulls away, we’ll get west and north-westerly winds in the northern counties.

“The storm will be over on Saturday but the weather will remain inclement.”