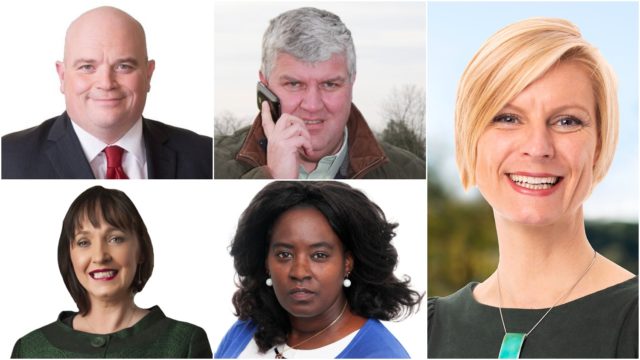 There a number of local candidates contesting for a seat in the Senate with nominations now closed and voting to commence later this month.

Two of the General Election candidates who were unsuccessful in Kildare South and one in Laois-Offaly have secured nominations and put their name forward while there are also two independent candidates with strong local links.

The Green Party‘s Pippa Hackett from Geashill, who was the sixth-placed candidate in Laois-Offaly in the recent General Election, is one of her party’s nominees.

Fianna Fáil‘s Fiona O’Loughlin, who lost her seat in Kildare South, as well as Labour‘s Mark Wall who missed out on a seat in that constituency also are both contesting.

There are two local independent candidates – with Dermot Cantillon, owner of Tinnakill House Stud in Coolrain, and Salome Mbugua Henry, who is the Irish Human Rights & Equality Commissioner and founder of AkiDwA – the Migrant Women’s Network in Ireland. Salome is originally from Kenya but has been living in Ireland for 22 years.

Dermot Cantillon is currently chairman of Naas racecourse, a former chairman of Tote Ireland and a former long-serving board member of Horse Racing Ireland. He has been nominated by the Irish Thoroughbred Breeders Association, one of over 100 various groups that are a nominating body. Others include the Irish Dentists Association, Irish Wheelchair Association and Irish Congress of Trade Unions.

The Upper House of Parliament, the Senate can scrutinise and make recommendations to legislation and can propose a new law or a change to an existing law.

The Senate can also invite people in civil and public life to address the chamber on their areas of expertise. Senators will also be members of Oireachtas committees.

Ballot papers are issued on Monday, March 16, to those eligible to vote and closes two weeks later on March 30.

Counting of the votes takes place in Leinster House straight away with the results expected in early April.

It is likely we will know 49 members of the Senate in the first few days of April.

We won’t know the 11 Taoiseach’s nominees – until there is a Taoiseach appointed as part of new government. 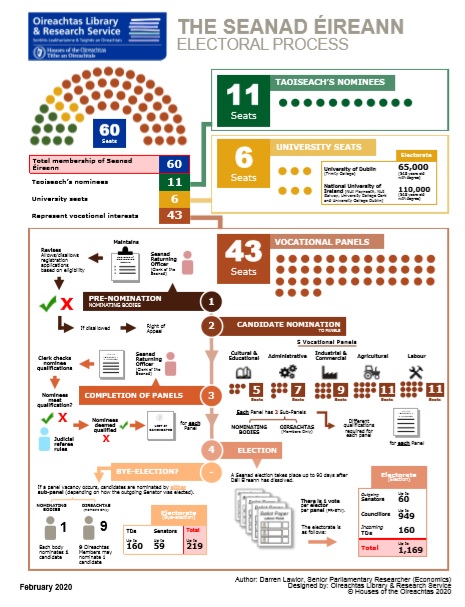 60 Senate seats to be filled

The Senate elections are incredibly complicated. In all there are 60 seats, with 11 of those reserved for the Taoiseach of the day. He or she can elect whoever they like to those positions though some of those seats may be given to a coalition partner for them to fill as part of a government formation deal.

There are then 43 seats on the five vocational panels – Administrative (7), Agriculture (11), Cultural and Educational (5), Industrial and Commercial (9) and Labour (11).

Who can run and who can vote?

For the vocational panels only TDs, outgoing senators and county and city councillors have a vote, meaning an overall electorate of less than 1,200.

Unlike the General Election, where anybody can run, a candidate must meet the qualification for the panel in question – and obviously be nominated.

To further complicate it, there are two ways to get a nomination – an ‘inside’ and ‘outside’ nomination. An inside nomination is where a candidate is nominated by four members of the Oireachtas – either a TD or an outgoing Senator.

There are also over 100 bodies that can nominate a candidate with Fiona O’Loughlin, for example, nominated by the Alzheimer’s Society of Ireland and supported by Fianna Fáil. In that instance Fianna Fáil could save their nominations for other candidates that didn’t secure an outside nomination.

And of the seats that are up for grabs, there are rules over how they must be filled. On the Cultural and Educational panel there are five seats – but there must be at least two inside and two outside candidates.

Canvassing for a Senate then is different than a General or Local Election with those seeking to win a seat generally travelling all over the country to meet councillors to seek their support.

Councillors have a vote for all five panels and are expected to vote along party lines. On this occasion, Fianna Fáil are the strongest party in terms of local representatives with 279 councillors around the country.

Fine Gael have 225 while Sinn Féin, in direct contrast to the General Election performance, suffered huge losses in last year’s Local Elections when they went from 159 to 81 seats. The Greens have a record 49 councillors (up from 12 from the previous Local Elections). Labour have 57 and the Social Democrats have 19.

Llike the General Election, voting is also done by Proportional Representation with a Single Transferable Vote (PR-STV). Those voting do so in order of preference.

So while the candidates are all going for a seat, in many instances they are not directly up against each other.

What panels are the local candidates running for and who are they up against?

There is a local interest in four of the five vocational panels. Labour’s Mark Wall, who has twice performed well in a General Election and is a huge vote getter in the Local Elections in Athy, is one of 35 candidates seeking one of the nine seats on the Industrial and Commerical panel.

Among those he is up against are former Fianna Fáil TD Timmy Dooley from Clare, former Fine Gael senator Catherine Noone and singer Frances Black who is an outgoing independent senator.

Fianna Fáil’s Fiona O’Loughlin is one of 19 candidates seeking one of the seven seats here. Salome Mbugua Henry is also seeking a seat on this panel.

Former TD Noel Rock and Emer Currie, who was Leo Varadkar’s running mate, are among the Fine Gael candidates for this panel as well as Tipperary councillor Garret Ahearn.

Among the other Fianna Fáil candidates are outgoing senators Lorraine Clifford Lee from Fingal and Diarmuid Wilson from Cavan.

There are 11 seats on the agricultural panel with 26 candidates in the mix. This is where Pippa Hackett is seeking to retain the seat she held briefly after being elected to replace Grace O’Sullivan from Waterford who was elected as an MEP.

Dermot Cantillon, the Waterford native who owns Tinakill House stud farm in Coolrain, is an independent candidate for this panel.

There are 11 seats on this panel and only 19 candidates. Among those are outgoing Senators Jerry Buttimer (Fine Gael), Ned O’Sullivan (Fianna Fáil) and Ger Craughwell (independent). Also in the mix is former Fianna Fáil TD Shane Cassells, and Westmeath councillor Aengus O’Rourke, son of FF veteran Mary.

There are 20 candidates for only five seats here – with a list of high-profile and recognisable names.

At 27, Sinn Féin’s outgoing Senator Fintan Warfield is one of the youngest candidates in the race. He is a former full-time musician and a cousin of Wolfe Tones musicians Derek and Brian Warfield.

Kyne is actually an outgoing senator, having only been been appointed to it in February as there was a vacancy among the Taoiseach’s nominees following Frank Feighan winning a Dáil seat in Sligo-Leitrim.

Malcolm Byrne is fighting his fifth election in less than a year. He was a Fianna Fáil European candidate last May when he also contested the Local Elections where he topped the poll. He then won the by-election in Wexford in November following Mick Wallace’s election to Europe.

His spell as a TD was short-lived, however, as he lost his seat in the General Election and is now going for the Senate.

Among the other familiar names here are former Longford-Westmeath TD Gabrielle McFadden (Fine Gael) and Mary Newman-Julian (Fine Gael) who was a candidate in Tipperary in the General Election and is a sister of former FG TD Kate O’Connell.

Saoirse McHugh, who was a European and General Election candidate, is going for the Green Party.

You can check out the full list of Senate candidates here.