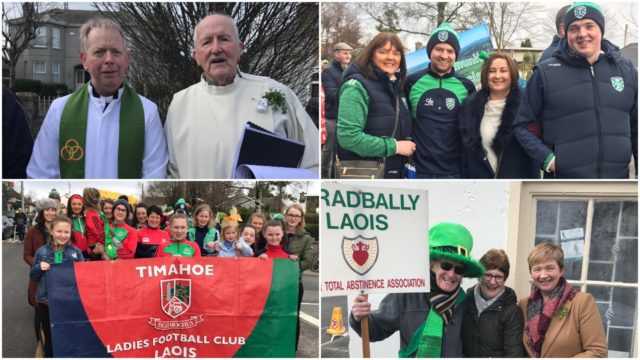 Taoiseach Leo Varadkar announced yesterday the cancellation of the state’s St Patrick’s Day festivities but that ban only covers events that were to be hosted by the government.

Almost all parades around the country are run by volunteers so it is up to each committee to decide whether to proceed or not.

Yesterday, Durrow and Mountmellick announced they would be postponing their events while another eight have now followed suit.

Following a meeting last night, the parish of Stradbally decided to call off their three parades – in Stradbally, Timahoe and Vicarstown.

Killeshin and Graiguecullen have also followed suit while so too have Spink.

Rosenallis is also off with PRO Daniel McDonald confirming the news.

He said: “In line with the Government directive as a result of the Covid – 19 outbreak, Rosenallis Development Association announces the cancellation of its 2020 parade.

“The health of all those participating and attending is imperative and must come first.

“We would like to thank everyone who contributed to the organising of the parade and look forward to staging our parade in the future.”

While Abbeyleix is also off with the committee making the following statement:

“The organising committee have brought forward their decision and this year’s St Patrick’s Day Parade in Abbeyleix is cancelled.

“We appreciate that this decision will disappoint many people but in the interest of public health and to insure that Covid 19 is minimised we feel that this is the correct decision to make.

“We would ask businesses and households to continue to decorate and celebrate St Patrick’s Day in their own way.”

That means that there are now just three parades in the county that are still currently set to go ahead.

Clonaslee, who were hoping to run their first parade in 40 years this Sunday March 15, will hold a meeting to make a decision tonight.

While Mountrath, who were planning a climate change theme, and Ballyroan will also hold meetings tonight to decide whether they will proceed or not.

Coronavirus: No new deaths but 18 new cases as video of street drinking emerges