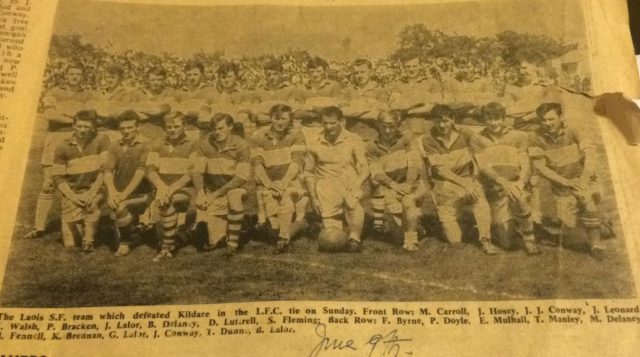 This piece originally featured on LaoisToday on June 16, 2018, ahead of that year’s Leinster football final

Only eight times in the last 50 years have the Laois senior football team reached a Leinster final and, as we begin our countdown to next week’s decider between Laois and Dublin, we look back on some of the county’s previous trips to Croke Park when provincial glory was on the line.

The first instalment in that line of games is the 1968 Leinster final – when Laois travelled to Dublin high in confidence to take on Longford.

Wins over Wexford, Carlow, Kildare and Offaly ensured Laois’s first final appearance since 1963 when they were beaten by Dublin.

The presence of Longford in the final had Laois in confident mood although Longford had a fine team, with the bulk of their players having won the National League final in 1966 and they showed their pedigree by beating reigning All Ireland champions Meath to reach that year’s Leinster final.

But Laois  were no match for Longford on the day, losing 3-9 to 1-4. The Leinster Express headline the following week described how “Rampant Longford put paid to Laois championship hopes” while a hard-hitting sub-heading read “Lack of teamwork and collective training evident”.

The loss of Jimmy Leonard – who owns Leonards Carpets in Portlaoise – to injury early on was a big blow, the Stradbally man replaced by Timahoe’s Mark Delaney. Laois trailed 0-7 to 1-1 at half time, the goal coming from Grauguecullen’s Mick Fennell from a Johnny Lawlor free.

Laois were in contention throughout the second half but Longford got two late goals to seal a famous win. It was their first ever Leinster title – and not only have they never won one since, they have yet to reach another final. They were later beaten by Kerry in the All Ireland semi-final.

Indeed the Laois team that played that day had many names that went on to serve Laois well over the years with two families in particular making a long-standing contribution.

Three Lawlor brothers – Gabriel, Brian and Johnny – started that day for Laois while there were two Conways – John and JJ.

Gabriel also went on to manage Laois to All Ireland minor joy in 1996 and was a senior selector in 2003 when Laois won the Leinster title.

The Conway link is strong too, with three of JJ’s sons involved in Leinster finals. Chris, injured in 2003, captained Laois in 2004 and also played in 2005 and 2007. Paudge came on as a sub in the 2004 replayed final while David is involved with this year’s team and has appeared in every game so far in this championship.

Kieran Brennan from St Joseph’s was wing-back in that ’68 final and went on to be a selector for Laois while wing-forward Brian Delaney from Portlaoise was a selector with Gabriel Lawlor on that minor team in ’96.

That last Sunday in July was a disappointing day for Laois – one that saw them also lose the minor final to Dublin when they were going for three Leinster titles in a row.

*Thanks to Pat Delaney for supplying this picture