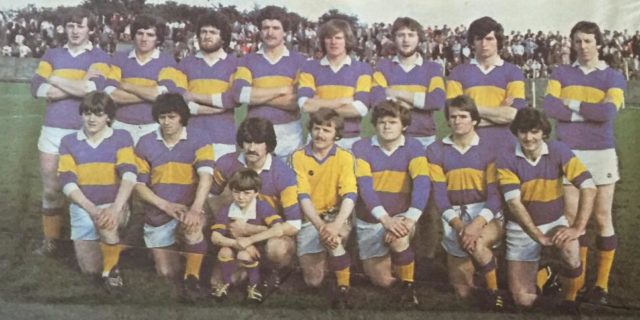 In terms of late goals in dramatic county finals, the 1980 decider is right up there with Jody Dillon’s injury time winner for Stradbally in 2016, a game that saw Portlaoise denied the 10-in-a-row.

This year marks the 40th anniversary of O’Dempsey’s last senior success – a triumph that was achieved thanks to a last-minute winning goal from Brian Costello.

“O’Dempsey’s grasp senior football title from Graiguecullen in the dying seconds,” was the headline in the Leinster Express a couple of days after the game.

“While fortune favours the brave and no one can deny the great fighting spirit of O’Dempsey’s who hauled themselves back to dramatically  … lady luck dealt a cruel blow to Graiguecullen.”

With the clubs meeting in the 1980 final, one was going to end their losing streak.

And for most of the game it looked as if it would be Graigue. Though O’Dempsey’s led 0-4 to 0-2 early in front of a large crowd in O’Moore Park on a glorious September Sunday, Graigue led 0-5 to 0-4 at half time.

And they were 0-7 to 0-4 clear with two minutes remaining. O’Dempsey’s went from the 25th minute to the 58th minute without scoring but a Padraic Hughes free reduced the deficit and from the next attack, Costello won possession and “found an opening on the left hand side of the Graigue goal and won for his side victory in the most dramatic final in recent years”.

“I am elated, absolutely thrilled,” O’Dempsey’s club chairman Ber Tynan was quoted on the front page of the Leinster Express.

“It is all due to the spirit among the players and the hard work of the officials,” added Ber, who had been on the O’Dempsey’s team that had won their only other championship 17 years earlier.”

“Men like Mick Keogh, the team trainer, Noel Behan, the co-trainer, coach Noel Carroll and selector Jack Behan have all worked tremendously hard. So too have club secretary Seamus Kehoe and the rest of the committee.”

“I know we were lucky on the day,” added Mick Keogh. “But you need luck to win anything. We played bad on the day and still won.”

On that same day O’Dempsey’s drew the minor final with Mountmellick before winning the replay to crown an unforgettable year for the club.

Graiguecullen chairman Willie Dooley was gracious in offering his congratulations to the O’Dempsey’s dressing room.

“Congratulations on winning and especially on the exemplary manner of your players on the field. You certainly deserved it.

“I am shocked at losing having come so close to winning but defeat must be accepted when it comes.”

Graiguecullen also lost the following year’s final by a point (to Portlaoise) and then had to wait 30 years for their next final appearance, when they were again denied by Portlaoise.

O’Dempsey’s lost the 1983 final to St Joseph’s and didn’t appear in the final again until 2018. They haven’t won the Laois SFC title since that dramatic success of 40 years ago.