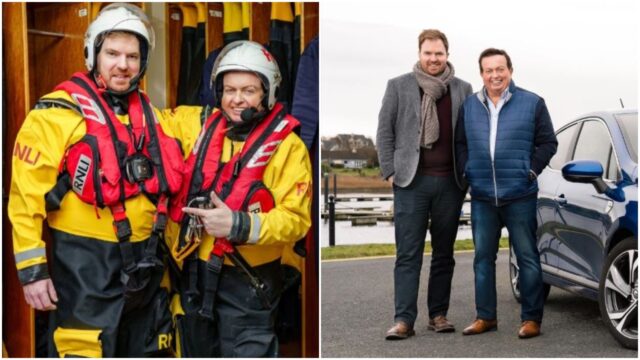 This was a great laugh the last time – and we’re hoping the second installment will be just as good.

Laois comedian Bernard O’Shea has teamed up with RTE Sports presented Marty Morrissey for a road-trip around Ireland.

The pair first became friends after appearing on the same series of Dancing With The Stars in 2018.

The first of the three part series airs tonight, Wednesday May 13, on RTE One at 9.35pm.

In this brand new series, Marty and Bernard meet various people from a variety of walks of life, from different communities around the country, who do remarkable things for their local areas.

Each week they will meet a new group, with whom they will set a challenge in order to fundraise for that group.

And in one of the remaining episode, Bernard will bring Marty back to his native Durrow.

When there, they team up with the Durrow members of the Laois Fire & Rescue to help launch the Durrow Fire and Rescue Fundraising Calendar.

Catch episode one on RTE One at 9.35pm tonight.

#MartyandBernard: On The Road Again starts on Wednesday night with a visit to the Ballybough GAA for Mas who definitely put it up to the lads.?️ pic.twitter.com/fcnXMrrUeo