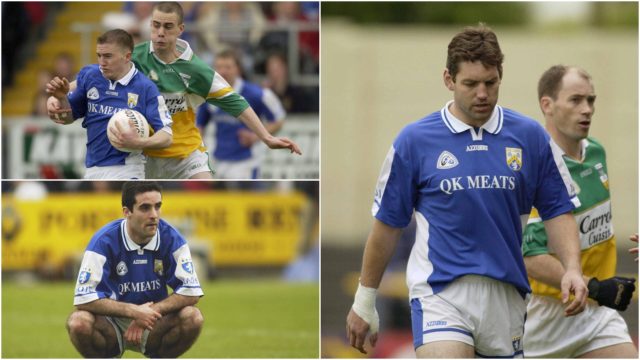 The 2003 inter-county football season will never be forgotten in Laois.

A first Leinster title in 57 years, a win over Dublin in Croke Park, an appearance in the Division 1 league final and a buzz of excitement all year long.

But as the curent Laois team prepare for Saturday’s All Ireland Round 3 Qualifier game with Offaly in O’Moore Park, we look back on the 2003 meeting between the sides at the same venue.

In front of a crowd of almost 13,000, Laois’s Leinster odyssey that year could have been over almost as soon as it started.

Instead the sides drew 1-12 each, Laois won the replay a week later in Tullamore and went on to beat Dublin and then Kildare to lift the Leinster title.

The Leinster football championship was a lot more open then than it is now (from 2000 to 2004 there were five different winners) and Offaly had been Leinster champions as recently as 1997.

The previous year they’d been beaten after a replay by Kildare in the Leinster semi-final, while they’d beaten Laois that season and in 2001.

At half-time of the clash in Portlaoise on the last Sunday of May in 2003, Offaly looked well on their way to setting up a Leinster semi-final meeting with Dublin.

Thanks to a rocket of a goal from almost 20 yards from Ciaran McManus just before half time, the visitors led 1-7 to 0-5 at the break with Niall McNamee, then still a minor, making his debut in the full-forward line for Offaly.

It’s not exaggerating to suggest Laois saved their season in the dressing room at the break that day.

Tom Kelly was moved from corner-back to centre-back (where he’d eventually win an All Star) and was inspirational in the second half as Laois clawed their way back into contention. With 20 minutes to go, the sides were level.

Yet Offaly stemmed the tide and were 1-11 to 0-11 ahead by the 68th minute. Laois’s problems were exacerbated following a straight red card for David Sweeney – just two minutes on the field – for a foul on Karol Slattery and it looked to be slipping away from them even when Mick Lawlor pointed a late free.

But the drama was only starting. A long ball from Darren Rooney as the game headed for injury time was brilliantly caught by Kevin Fitzpatrick at full-forward and while his pass to Lawlor looked suspiciously like a throw ball, Lawlor rifled the ball to the net with his left boot for a brilliant goal.

That put Laois a point up but Offaly came back down the field and forced a ’45 which McManus calmly slotted over the bar. Referee Michael Collins blew the full-time whistle shortly afterwards.

The new sense of vibrancy about Laois was reflected in O’Dwyer’s interview after the game.

“People were probably saying this is the same old Laois at half time but we had a few words them and changed things around a bit and thankfully it worked.

“(We had) a few harsh words but sure they knew themselves that they weren’t playing well. I thought they picked it up brilliantly in the second half.

“That doesn’t surprise me anymore because there is a real sense of spirit in this Laois camp. They proved that during the league and again today.”

Eight days later, on the Bank Holiday Monday in Tullamore, Laois won the replay 2-10 to 0-13 – and the momentum continued with wins over Dublin and Kildare before All Ireland champions Armagh brought an end to the journey in the All Ireland quarter-final.

SEE ALSO – Leinster final memory: Greatest day of all in 2003