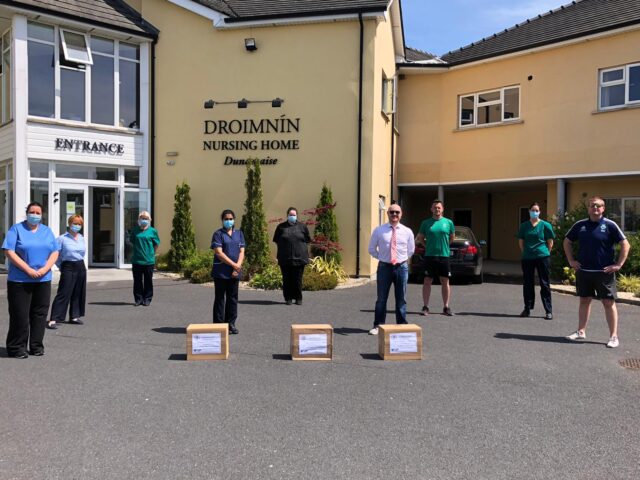 Last month, the league called on its clubs and supporters to back a fundraiser that they launched in conjunction with The Mobility Shop which is based in Portlaoise.

A total of €10,000 was raised and that money was then used to purchase vital Personal Protective Equipment which was then distributed to 14 nursing homes in Laois, Offaly and Westmeath.

Deirdre O’Callaghan, who is the Director of Droimnin Nursing Home, thanked the lads for their kind gesture and also revealed that the home remains Covid-19 free.

She said: “On behalf of everyone in Droimnin Nursing Home, this is so appreciated. This is the second time that JP Cushen of Stradbally Town has been up with donations and they really do help.

“We are a very proud nursing home that we are still Covid-19 free and we hope that we can maintain that status as long as we can.”

CCFL Committee and County Councillor James Kelly thanked all of the clubs for getting behind the fundraiser.

He said: “This was an opportunity for football clubs across the midlands to work with the league to honour and recognise the frontline healthcare staff who are doing so much to help the most vulnerable people in our society.

“The aim was to purchase PPE equipment and distribute to 14 nursing homes in the midlands with the target set at €10,000 via the clubs, the executive and our major sponsor The Mobility Shop. The response has been brilliant with the target been reached in 4 weeks.

“The equipment was purchased from the mobility shop at a discount price and then the CCFL executive distributed the PPE to the nursing homes who were delighted to receive same.

“The Combined Counties Football League executive would like to say a massive big thank you to our clubs and The Mobility Shop for contributing to this great cause.”

The CCFL hopes to finish the remainder of the 2019-2020 season in the coming months.

Committee member Alan Wright said: “It would take maybe six to eight weeks to finish the season and the plan is to do that if we are allowed to by the health authorities.

“We’re waiting to hear from the FAI about what date we can resume matches and once that happens we will contact our clubs and referees and see what they want to do.

“We are hoping to finish the leagues and the cups and then be ready to go with the new season in the middle of October.

See Also – Moment in Time: Stradbally gets its first ATM in 2003