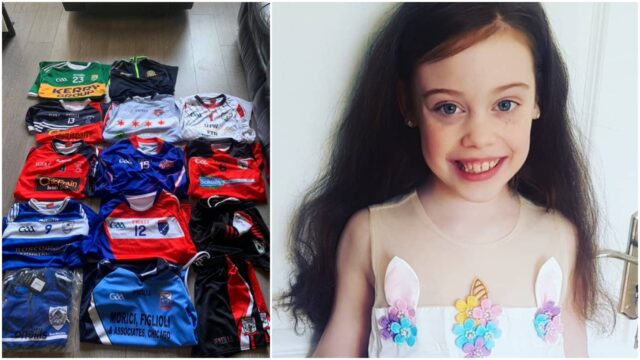 A Laois man has launched an online GAA raffle in a bid to help a young Tipperary girl in her bid to get to America for life-changing spinal surgery.

Joe Walshe from The Heath held a similar online raffle in aid of the ‘Do It For Dan’ campaign and it proved a huge success.

Now he is looking to replicate that for 7-year-old Sophie Breen, from Borrisokane, Tipperary, who was diagnosed with spastic diplegia cerebral palsy at the age of three.

Her condition has been slowly deteriorating over the years, causing her pain and tightness, particularly in her legs.

Sophie now has to wear a splint to school and use a wheelchair for longer distances.

But now there is hope for Sophie as she has been accepted for life-changing selective dorsal rhizotomy (SDR) surgery in America.

The surgery, which would take place at St Louis Children’s Hospital in Missouri next year, would save Sophie from further pain but it costs €100,000.

So far, almost €40,000 has been raised but there is still much more to go and fundraisers like Joe’s will help.

Joe explained: “I’ve decided to continue on the Do it for Dan raffle with a raffle for this amazing little girl Sophie.

“I had some items which had yet to arrive before Dan had reached his target.

“The same process will apply here. Every €5 donated will be one entry into the raffle so €10 is equal to 2 entries etc.

“The raffle will take place in 3 weeks time. I hope to add a couple of more prizes to the bundle. One winner will be selected on a live Facebook feed .

“The prizes have been gathered from Chicago GAA clubs and some Irish GAA stars can be seen on my Facebook page or else as the cover photo for the campaign itself.

“Thank you all for your support and drive so far in every charitable campaign.”