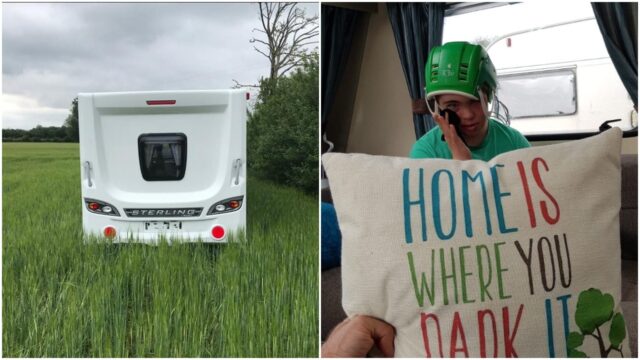 This is brilliant news.

Gardai in Laois have recovered a caravan belonging to a young Louth boy who has special needs.

15-year-old Drogheda teenager Sean Sharkey-Carroll, who has Down syndrome and autism, is non-verbal and is blind in one eye, had his caravan stolen from a yard in Meath last week.

But LaoisToday understands that Sean, his mam Fiona, dad Peter and sister Aoibhinn, will be reunited with their caravan today.

His mam Fiona had launched a desperate plea to recover the caravan as she says that it is her son’s ‘little piece of heaven’.

Speaking on Newstalk Breakfast for Your Call yesterday morning, Fiona told just how important the caravan is to Sean.

“He is non-verbal, he has autism and he has no vision in one of his eyes.

“The reason the caravan is so important to us is that over the last three months, we have been in lock-up.

“We live in the Louth Meath area and, because Sean has autism, we were allowed to travel slightly.

“So, we used to go over every second or third day – myself or my husband would take him over. He would have his iPad and his little treat and he would sit in the caravan for a change of scenery to get out of the house.

But on learning that Laois Gardai had recovered Sean’s caravan, Fiona took to Facebook to share her joy.

She said: “Thank you to all the public who have shared our appeal and been so kind.”

While Laois Gardai are delighted to have recovered Sean’s caravan, they are determined to catch the culprits and have launched the following plea for information.

They say: “Gardaí in Portarlington are appealing to the public for their assistance in establishing the movements of this caravan which had been stolen on the night of the 10th/11th June 2020 from a yard in Gernonstown, Slane, County Meath.

“Thieves broke into the yard and caused criminal damage to other property at the location.

“On the 17th June 2020 Portarlington Gardaí recovered this caravan in a field in the Ballintogher area of Ballybrittas, County Laois.

“We believe it was left there overnight. We are looking for any assistance from both locals and anyone that might have passed through the area overnight to contact Portlaoise Garda Station on 0578674100 with information.”