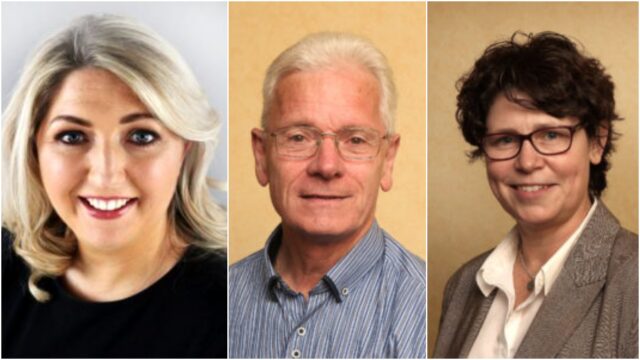 Cllr Thomasina Connell and Cllr Aisling Moran have been elected the new chairpersons of their respective Municipal Districts, following the AGMs in Laois County Council on Wednesday.

Cllr Connell will serve as chair of the Portlaoise area for the next 12 months after being elected to take over from Cllr John Joe Fennelly while Cllr Moran will take up the position vacated by Cllr McEvoy in Graiguecullen-Portarlington.

Both women were elected for Fine Gael for the first time in last year’s Local Elections.

Their election to these roles is part of the power-sharing agreement between Fine Gael and Fianna Fáil in Laois County Council, though it once again left a sour taste for Aidan Mullins, who has consistently hit out at what he deems “exclusion”.

The Sinn Féin Portarlington-based councillor is part of a technical group in Laois County Council along with other non Fine-Gael/Fianna Fáil members and has made an annual plea for the various chairperson roles to be opened up.

He labelled it as “sad and shameful” as the bid to have independent councillor Ben Brennan elected to the chair was defeated 4-2.

He called for the chairperson’s role to be opened up “in the interest of democracy, fairness and mutual respect” and said the councillors of Fianna Fáil and Fine Gael “should be ashamed of themselves”.

“It seems the nature of exclusion that is applying at national government level is filtering down locally too.”

“Nothing has changed and I can’t see change in the next few years either. It’s the same at national level,” said Cllr Ben Brennan.

“What the new national Government has done is not to save the country but to save their own rear ends.”

Outgoing chairman Cllr McEvoy (FF) responded by saying “That’s how politics works and that’s the reality. It has been that way since the beginning of the State and we just have to live with that.”

However, Cllr Mullins responded by saying “Civil War politics have changed now and you had it within your remit to change it today and you were not up for it.”

Not withstanding his views, Cllr Mullins wished Cllr Moran the very best in her role, adding that his comments “were never personal”.

A similar scenario had played out earlier at the Portlaoise Municipal District when Cllr Thomasina Connell was elected as the new chairperson with five votes to Cllr Noel Tuohy’s two.