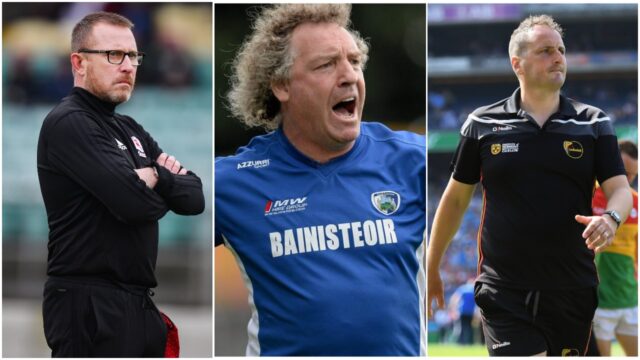 Three men are believed to be in the running for the vacant Carlow senior football manager’s job – and one of them is a Laois man.

RTE News reports that Pat Critchley is one of three people to be put forward to fill the void left by the sudden departure of Turlough O’Brien earlier this month after six years in charge.

The Portlaoise native is Laois’s only hurling All Star and a man who played hurling, Gaelic football and basketball at a high standard.

A legend of the fine Laois hurling team of the 1980s, an All Ireland club football winner with Portlaoise in 1983 and a fine basketballer with the Portlaoise team in the national leagues in that decade also.

While he has also made an immense contribution to sport in this county and beyond in hurling, men’s and ladies football and basketball in his role as a coach.

In Scoil Chriost Ri, he has helped teams to All-Ireland glory in basketball and Ladies football.

While earlier this year, he coached IT Carlow to the Sigerson Cup final where they were defeated by DCU.

The other two names reportedly in the running are Stephen Poacher and Joe Murphy.

Down native Poacher was right hand man to Turlough O’Brien in 2017 and 2018 when they led Carlow out of Division 4 and into a Leinster semi final in that time.

Poacher stepped away in 2020 to become part of the Down minor management team and also coaches senior club side Bryansford.

Current Eire Og manager Joe Murphy guided his club to Carlow glory and defeated Portlaoise in a Leinster semi final before going down to Ballyboden-St Enda’s.

Carlow will need to have a manager in place soon with action set to resume in October.