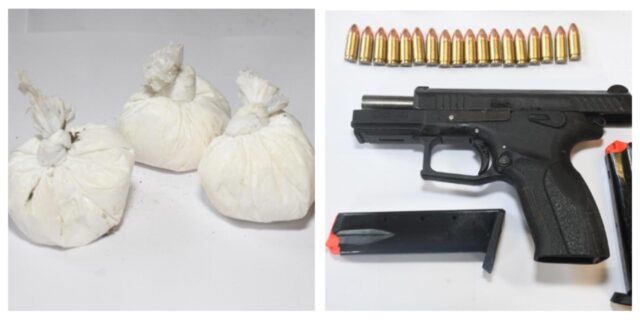 Gardaí have recovered a firearm and a quantity of drugs, which were discovered buried in a wasteland on the Canal Road in Portarlington today.

A search was conducted in the area this afternoon at 1pm as part of an intelligence led operation.

The firearm, a magazine and ammunition were discovered wrapped in plastic and buried on the site.

A glass jar containing a quantity of suspected cocaine with an estimated street value of €6,000 was also recovered from the site.

The firearm was confirmed safe by Gardaí and brought to Portarlington Garda Station.

This discovery follows on from a gun being found on Monday near Portlaoise.

A man in his 30s was found with a Glock handgun outside Portlaoise this afternoon.

”As part of an intelligence led operation conducted by Gardaí in Portlaoise attached to the District Detective Unit and District Drugs Unit, a car was stopped early this afternoon Monday 6th July, 2020 on the M7 at Clonkeen, Portlaoise,” said a statement from the guards.

“Gardaí carried out a search of the car and a Glock 17 handgun with ammunition was found and seized.”