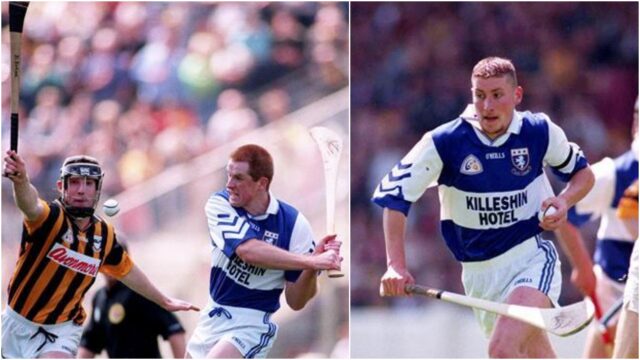 Of all the Laois hurling near misses over the years, this one cuts as deep as any of them.

“A day of grand larceny,” was the front page headline on the sports section of the Irish Independent the next day.

“Heartbreak for Laois as Kilkenny snatch unlikely victory,” was the Nationalist headline a couple of days later.

They even had chances to go further clear. David Cuddy, who scored five points in a fine display, missed a free and Mark Rooney, on his championship debut, and who’d got an earlier goal, missed a goal chance that would surely have put the game beyond Kilkenny.

But it wasn’t to be. Ken O’Shea came on as a sub and scored 1-1. Kilkenny survived. Laois were out.

“Laois should have won the game,” wrote Vincent Hogan in the Irish Independent.

The game was played on the Sunday following an horrific car accident outside Portlaoise that claimed multiple young lives – and it was something that Laois manager Padraig Horan referred to in an interview after the game.

“When you consider the situation in Laois yesterday with so many friends of these lads either killed or maimed, people should be so proud of this team.

“They came out today and hurled out of their skins. They lifted everyone. I think it’s a pity we’re not through because this team deserves it.”

A goal from PJ Delaney helped Kilkenny to a 1-6 to 0-8 lead at the break. Though Niall Maloney got in for a second Kilkenny goal early in the second half, Mark Rooney cancelled it out for Laois and then points from David Cuddy and Donal Russell put Laois ahead for the first time.

“Laois showed that they really,meant business when, after a subdued DJ Carey had shot a super point, they hit back with a hat-trick of points to surge three points in front,” wrote Paddy Hickey in the Irish Independent match report.

“Unfortunately for Padraig Horan’s side they subsequently missed two chances to extend their lead.

“First, David Cuddy was off-target from a free, and three minutes before O’Shea’s goal, Mark Rooney just failed to get a touch to a ball from Cyril Cuddy that went narrowly wide.”

Kilkenny would go on to beat Offaly in the Leinster final but with Offaly regrouping after parting ways with Babs Keating, they came back to beat Clare in an infamous All Ireland semi-final and then beat Kilkenny in the All Ireland final.

The following year Kilkenny manager Kevin Fennelly was replaced by Brian Cody and Laois suffered a heavy loss to them in Croke Park. They haven’t had as good chance of beating the Cats since.