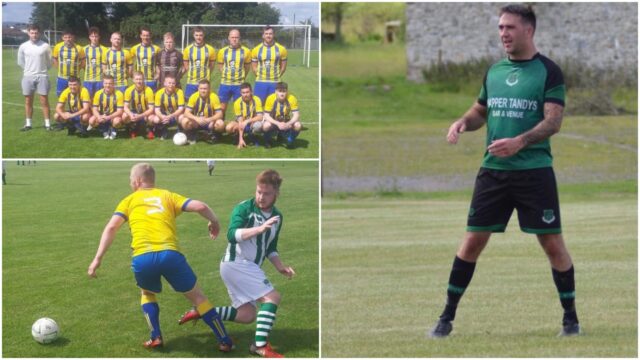 The domestic soccer season resumed in some parts of the country at the weekend and there was plenty of action involving Laois clubs.

Former League of Ireland forward Chris Mulhall was also on the scoresheet as Portlaoise moved up to fourth place in the table.

They are now just four points behind leaders Collinstown FC with four games to play – and they face Tolka Rovers, who sit second, at home on Wednesday night.

Below, we have all the results, a clip of Jason Murphy’s free-kick and reports from some of the wins that Mountmellick United, Stradbally Town, St Aengus and Abbeyleix Athletic enjoyed on Sunday.

Mountmellick kept their push for promotion to the Senior Division alive with a huge win over neighbours Rosenallis.

Shane Dowling was on fire as he netted four times with Shane O’Connell adding a brace and veteran Mark Grennan making it seven.

They now find themselves four points behind leaders Towerhill Rovers and Mullingar Town but have got a game in hand on both.

This was a fantastic end to end game in The Lawn where two teams right in contention for Division 1 faced off in a thrilling game.

Mullingar had the better of the early exchanges and went ahead on 16 minutes when a low cross was converted past home stopper Derek Beale from low range.

Stradbally regrouped and got back on top with Alex Conway, Jody Dillon and Tim Flood going close before the break. Mullingar also had their moments to go further ahead but it remained 0-1 at the break.

Stradbally roared out of the blocks in the second half knowing defeat wasn’t an option to stay in contention for the title and dominated possession right from the start. Conway and Benny Lawlor both had opportunities to draw level early on.

Mullingar were reduced to 10 men with 22 mins to go with a midfielder receiving a second yellow.

This led to the ball being nearly camped in the Mullingar half for the remainder of the game but they always threatened in the break with their attackers displaying both strength and pace in abundance.

Stradbally got their deserved equaliser on 76 minutes when a loose ball broke to substitute Tom Shiel and he fired home a low drive from all of 20 yards low to the Mullingar net.

Stradbally had a penalty shout late on for handball but referee Leslie Buckley waved play away and then Mullingar thought they grabbed the winner in injury time only for ref Buckley to rightly call it back for offside so a share of the spoils in the end in what was a terrific game with both teams leaving everything on the field.

Aaron Wright, Justin Lalor and Jody Dillon stood out for the home side with Wright especially adapting well to an unfamiliar left back role.

Division 3A leaders Killeigh suffered a blow as they were defeated by Stradbally Town’s second string on Sunday.

The Offaly side recorded a huge win earlier in the season when the teams met in The Lawn but the visitors turned that form dramatically on its head.

Stradbally started really well and went ahead after 20 minutes when Sean Devoy received the ball into his feet and rolled his marker brilliantly and slid a pinpoint pass to Derek O’Gorman to finish expertly.

Killeigh came back strongly and it was nip and tuck till half time but the visitors held a 0-1 lead at the break.

As you would expect from a team at the top of the table, Killeigh came out and took control early in the second half but Stradballly defended brilliantly.

Both sides missed good chances and then Killeigh must have thought they had the equaliser when their centre forward beat the Stradbally defence and Robbie Moore in goal only for Colm Clancy to make a goal saving tackle on the goal line.

Killeigh did equalise with a hotly disputed penalty on 80 minutes via Kilcavan’s Jason Maher but sub Richard Carolan won it for Stradbally when he took a pass from John Clancy 25 yards out and smashed it into the top corner late on to grab all three points for the men in Green and White.

A terrific win against the Division 3A leaders away from home and a result which helps fellow Laois side Abbeyleix who now draw level with the Offaly men at the top.

Best on the day for Stradbally were Sean Devoy, Noel Delaney, Murtagh Condron and Liam Clancy. 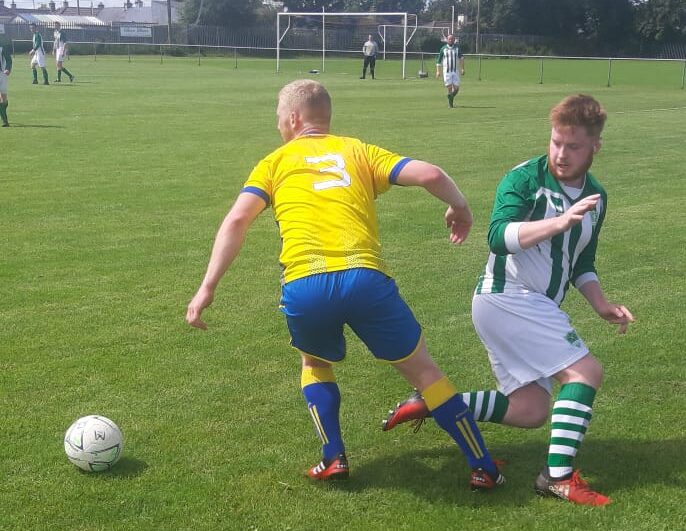 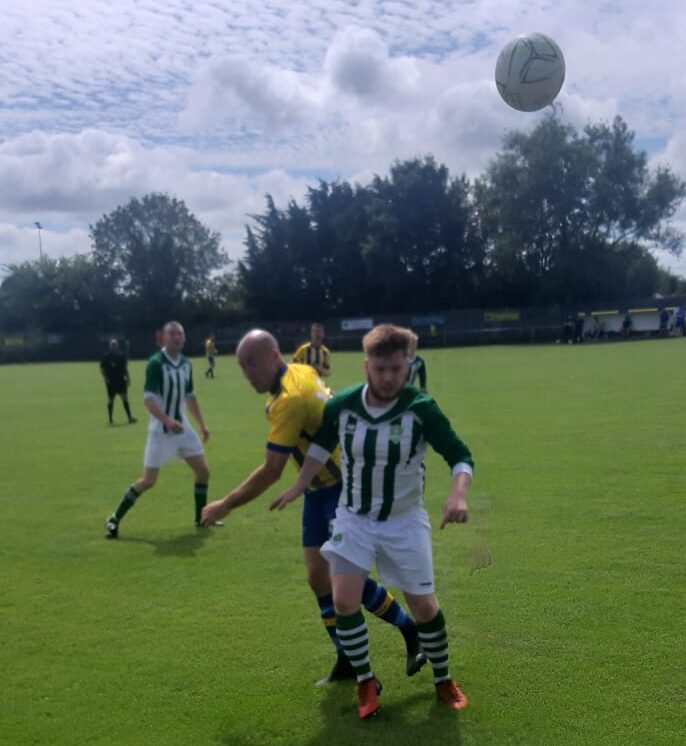 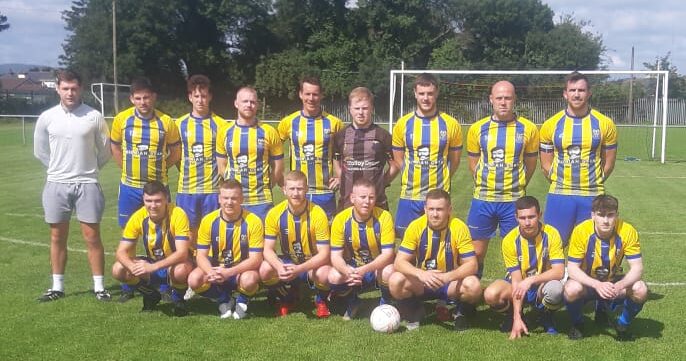 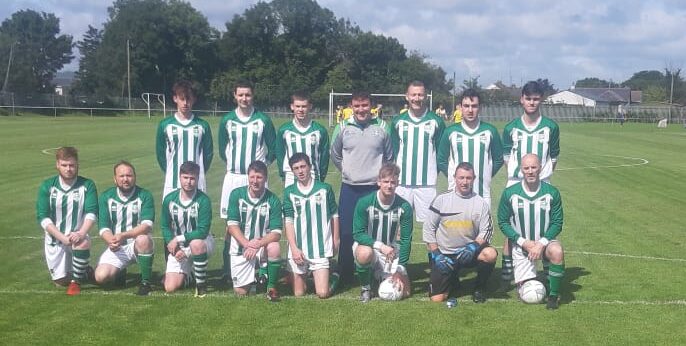 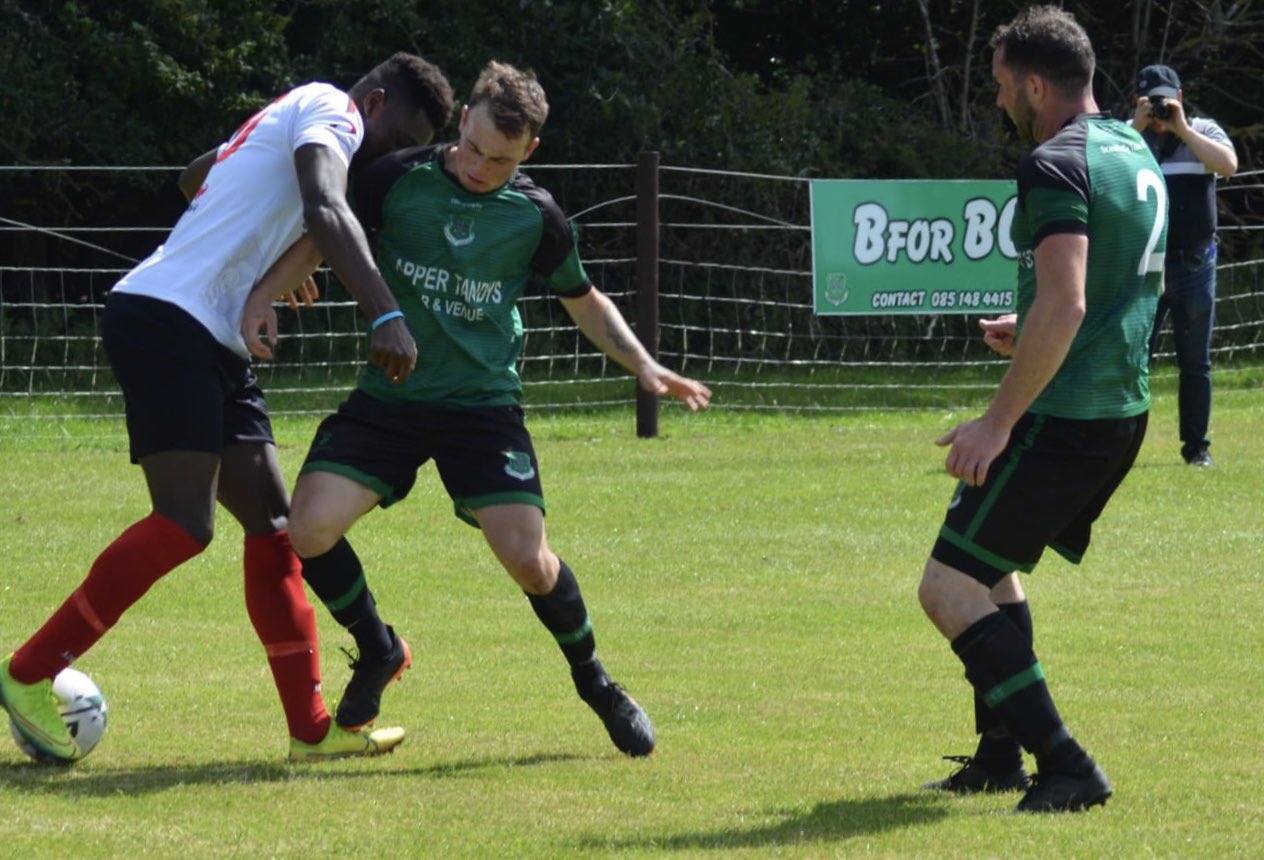 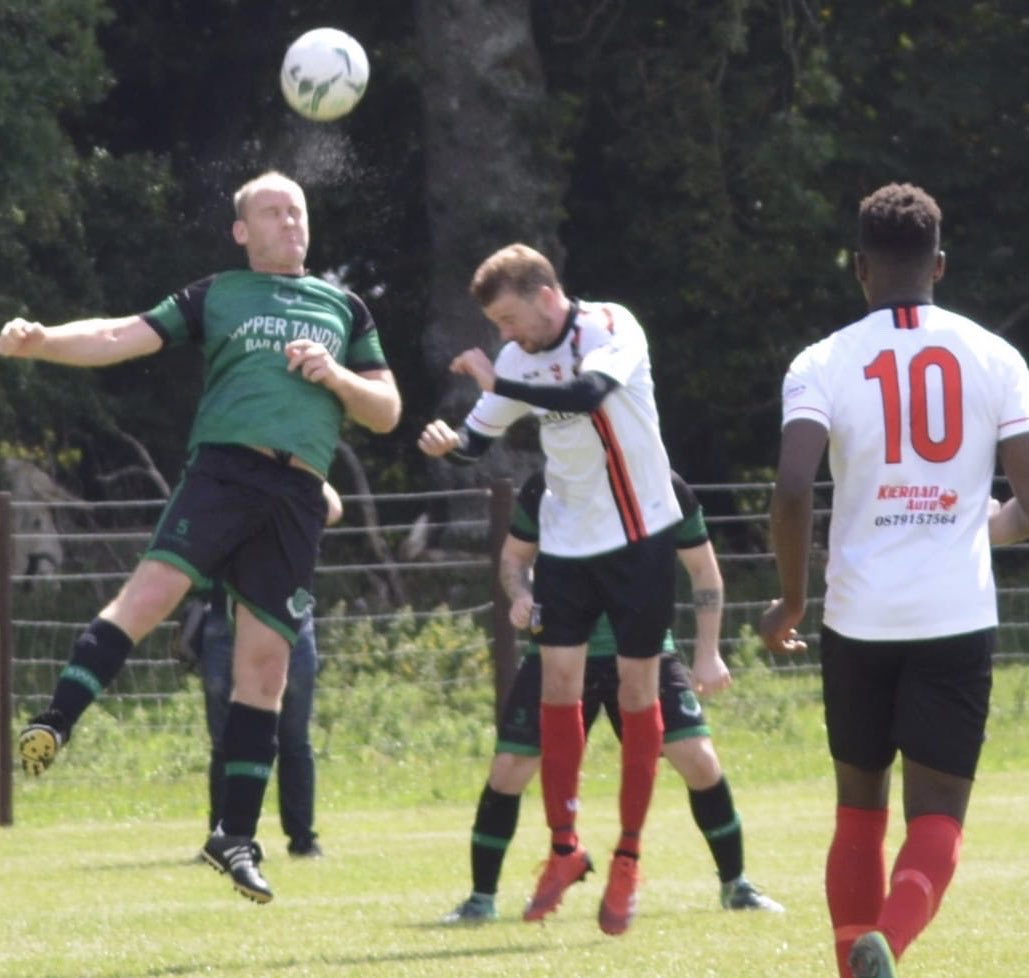 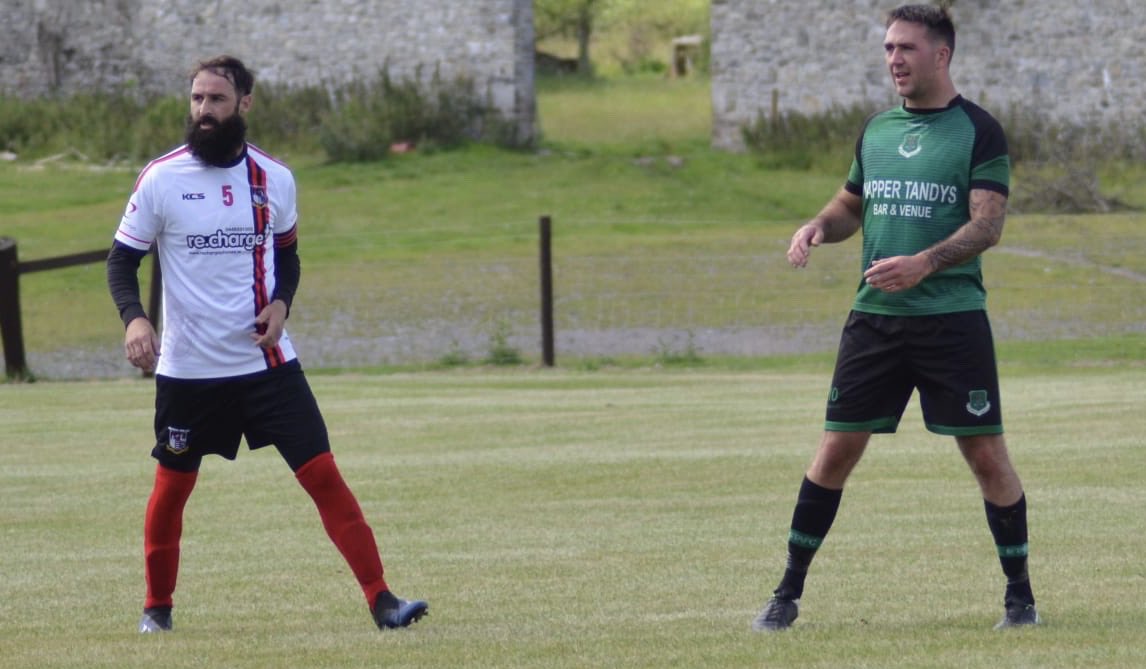 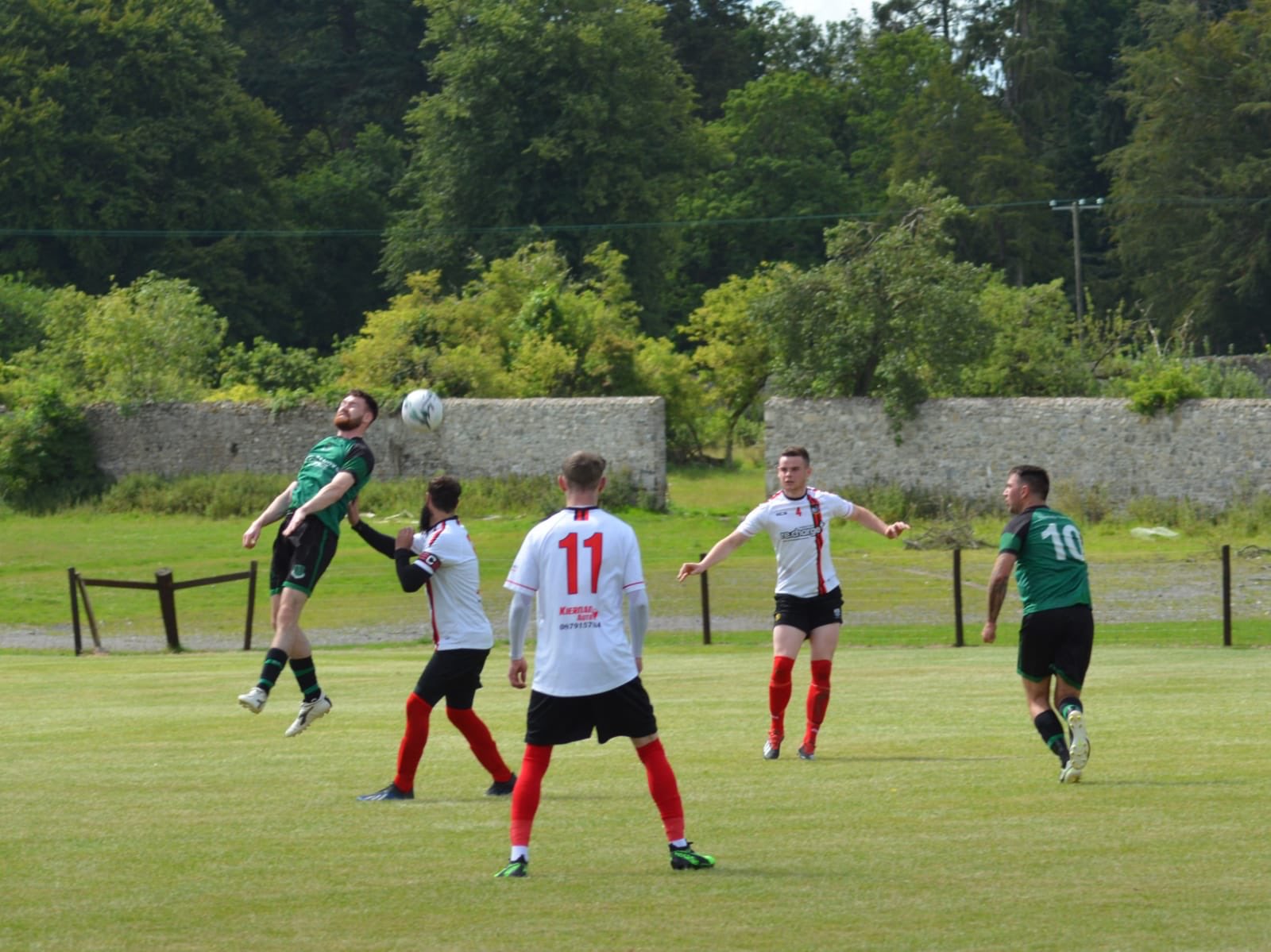