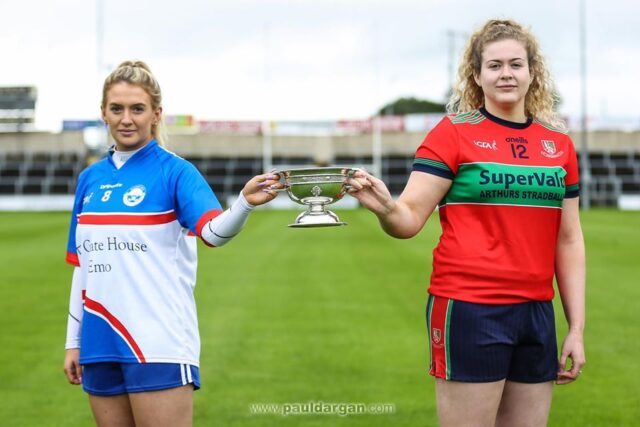 Timahoe bounced back from their opening round loss to reigning champions Sarsfields, with a win against St Paul’s.

St Paul’s started the game the better of the two sides. Holly Langford smashed the ball into the net inside two minutes to give St Paul’s a dream start.

St Pauls pressed and pressed but once Timahoe broke into attack they were clinical. Mo Nerney finished two good team moves with two points in the fifth minute to calm her side.

Timahoe were awarded a penalty soon after, which Nerney dispatched into the bottom right corner. Timahoe would lead for the rest of the game.

St Paul’s created opportunities but could not finish and Nerney’s long effort ended up in the net to extend Timahoe’s lead just before the first water break.

Maggie Murphy and Nerney extended Timahoe’s lead at the resumption. St Pauls’ backs were now struggling to keep up with the fast link play in the Timahoe’s forwards

However Aoibheann Maher and Emma Lawlor responded with a point each for St Paul’s but Nerney completed a fine hat-trick with two goals close to the end of the half. The teams were left at 4-9 to 1-3 at the break.

St Paul’s began the second half with a well needed Emma Lawlor free. However things only got worse for them. They went down to 14 players for ten minutes after a yellow card.

Timahoe capitalised and scored goals through Sarah Larkin, Katie Donoghue, Maggie Murphy and Orla Hennessey. St Pauls fought back when they were back to 15.

Timahoe keeper, Lisa Daly, pulled off three fantastic saves in quick succession as St Paul’s began to get a small foothold in the game.

Ciara Langford and Emma Lawlor struck with late goals for St. Pauls but it was too little too late. Timahoe broke out fast on a few occasions ans finished the game with two fine points from Donoghue and Jenny Murphy.

St. Pauls will rue not taking their chances at the beginning of the game as they suffer two defeats from two games.

Whilst Timahoe’s fast moving half-forward line of Jenny Murphy, Mo Nerney and Orla Hennessy will be sure to cause lots of problems for every team in this year’s championship as they claim their first win of this years championship.