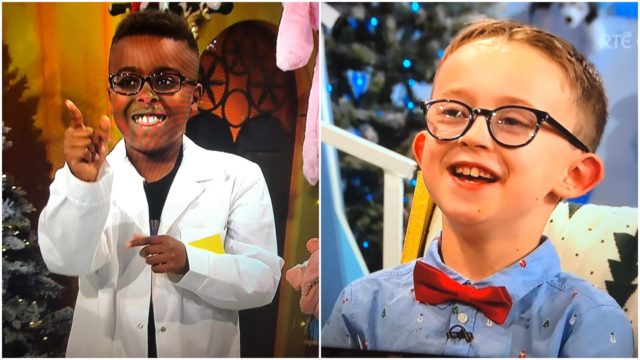 Applications are now open for children to be toy testers or performers at this year’s Late Late Toy Show.

Applications are now open to children from across the country who would love to appear live on air at the end of November for the annual fun-filled festive extravaganza.

Launching the opening of applications, presenter Ryan Tubridy told listeners of The Ryan Tubridy Show on RTÉ Radio 1 that the team wants every child with an interest in the show to apply.

He said: “We want to get as many applications in as possible.

“If you want to be on the Toy Show,  if you are a child and you think ‘I can sing I can dance, I can do mimicry, I can do magic, I am the chosen one in the entertainment world’, get in touch.

“You can be introverted, extroverted, upstairs, downstairs, inside, outside, it doesn’t matter, all you have to do is be a child. Before you know it, you can be talking to our elves, and you could be on The Late Late Toy Show.”

Last year, two Laois children took the show by storm as they both made individually hilarious appearances.

Eight-year-old Fiachra Kelly from Abbeyleix was up first last year and he doing one of presenter Ryan’s favourite things – reading books.

For being so good, Ryan presented Fiachra with a rare crystal from the Glengowla Mines in Connemara.

And not only that – Tubridy also arranged for Fiachra and his family to go to the mines for a VIP trip.

Up next was Fynn Loughnane is from Mountmellick and goes to school in Scoil Phadraig Naofa.

The nine-year-old, the only child of Jim and Ann, was testing some really cool science equipment.

He and Ryan made fake snow and there was something of a mishap when Ryan threw the snow into Fynn’s eyes and mouth!

However, like all good TV stars, Fynn took it in his stride and recovered to make a giant bubble.

The Late Late Toy Show is calling on all children across Ireland with any interest in appearing on the show to get in touch and submit their audition tapes by going to www.rte.ie/latelate.