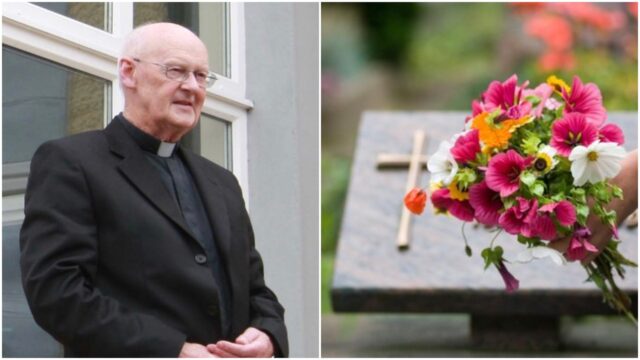 There has been an outpouring of emotion following the news of the sad passing of a popular Laois priest.

Fr Pat Breen, who served the parish of Stradbally and lived in Timahoe since 1992, passed away yesterday – Thursday August 13.

Along with Stradbally, Fr Breen, a native of Raheen in Laois, also served Rathoe, Broadford, Clonaslee and St Mullin’s in his time.

As well as being a man of the cloth, Fr Breen was a fantastic artist and he often called into the schools in Stradbally and Timahoe to pass on his talents.

He was also extremely witty – and would regularly leave his congregation in fits of laughter with his hilarious sermons.

He said: “Fr Breen was an absolute gentleman and his loss will be deeply felt by everyone in the parish.

“As well as being extremely well liked, Fr Breen always had a smile on his face whenever you met him and always had a kind word too.

“My deepest condolences to all his family members. May he Rest in Peace.”

Speaking to LaoisToday back in 2017, former parish priest of Stradbally, Fr Jim O’Connell, said that his favourite thing about working in the parish was getting to meet Fr Breen.

He said: “My favourite part of the experience was getting to meet and work alongside Fr Breen.

“I had heard so much about him before I arrived and I learned so much from him in my time there.”

St Colman’s National School said: “RIP Fr Breen. He will be so fondly remembered by all of the former pupils of Scoil Aonghusa and the B.N.S Stradbally, where for years he was a regular visitor.

“With his stories, his fantastic artwork and unique sense of humour, he endeared himself to everyone. Ar dheis Dé go raibh a anam.”

Stradbally native Joe Lacey said: “The legend that we were always delighted to see coming up the yard in primary school, knowing he was going to come in and waste a half an hour of class time, drawing Michaelangelo-esque pictures with charcoal and giving some advice. RIP Fr. Breen”

Vicarstown’s Bobby Miller said: “Loved his homilies, had his congregation in stitches on many occasions .May he rest in peace.”

While Timahoe’s Roghan Haedon said: “One decent man who served the village and parish greatly down the years may he rest in peace.”

He is deeply regretted by his sister Ina Reilly and his niece Heather, extended family, relatives and his many friends.

He will be reposing at St Michael’s Church, Timahoe from 12noon until prayer service at 7:30pm on Friday August 14.

Funeral Mass will take place at 2pm on Saturday in St Fintan’s Church, Raheen, Abbeyleix with interment to follow in the adjoining cemetery.