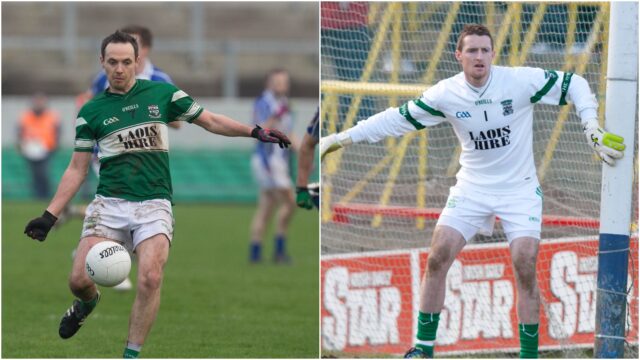 If the Laois football championship does get the go-ahead to resume next week, champions Portlaoise will continue their quest for dominance as they seek a fourth title in a row and a 13th in 14 years.

They’ll do so under new management with former player Kevin Fitzpatrick now at the helm having taken over from Niall Rigney for the 2020 season.

And they’ll also do so without three of their longest-serving players. Brian ‘Bruno’ McCormack announced his retirement last year while goalkeeper Michael Nolan and defender Brian Mulligan have also stepped away after hugely successful careers.

Nolan and Mulligan bow out with an incredible medal haul with Nolan winning an 14 Laois senior football championship titles and Mulligan 13.

Nolan’s first county final start came in 2002 when Portlaoise beat St Joseph’s, with Mulligan, then still a minor, as part of the panel.

The two started the 2004 final as Portlaoise went on to claim Leinster and reach the All Ireland club final.

They were both then present throughout the nine-in-a-row years with Mulligan a regular starter all through that time and Nolan involved right up until Graham Brody replaced him for the 2015 season.

Mulligan wasn’t involved in 2018 but returned for 2019, incidentally when Nolan was again back between the posts.

The two will go down as among the most successful club players in Laois of all time. They also have a serious collection of underage medals with Nolan winning five U-21 medals in a row.

Nolan, who was an excellent shot-stopper and had a massive kickout, was part of the Laois senior panel under Mick O’Dwyer but only established himself as first choice after Fergal Byron retired and played regularly throughout 2008, 2009 and 2010.

Mulligan will be remembered as a very versatile and extremely competitive back, who played in almost every position in defence as well as spells in midfield.

He made a handful of appearances for Laois at senior level, though never in the championship, but was a regular dual player with Portlaoise, winning a senior medal in 2004 and appearing in four losing finals from 2007 to 2011. After a spell away from the game, he returned to win a Senior ‘A’ medal in 2018.