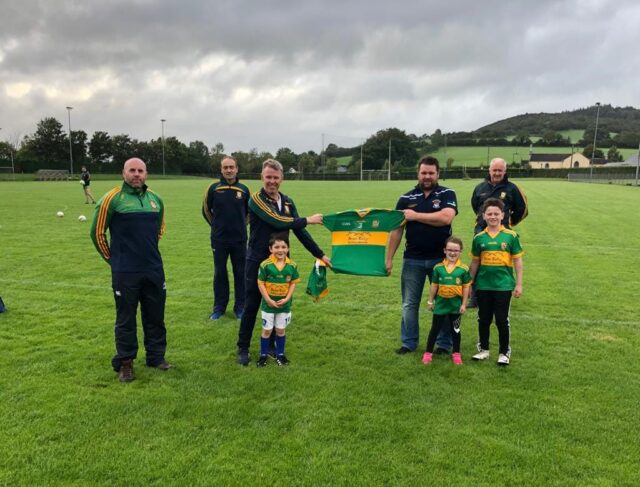 Park-Ratheniska recorded a comfortable victory over Castletown this evening on the first night of GAA action since “LOKdown” was lifted on Friday evening in the opening round of the Laois JFC ‘A’.

In what was a repeat of last year’s semi-final which Castletown won, Castletown were quickest out of the blocks here too as they went 1-1 to no score up after five minutes.

Ger Reddin pointed a free while Brendan Reddin slotted the ball past Denis Cranny in the Park-Ratheniska net.

Park-Ratheniska replied in the best way possible with DJ Connolly goaling from a penalty.

Richie Hitchcock raised a white flag from play to leave the sides level at the water break. The game was score for score for the remainder of the first-half.

Two superb scores, one from Kieran Delaney and the other from Padraig Dunne pushed the home side for the first time. Martin Phelan and Ryan Mullaney fired back with points from play.

Kieran Delaney slotted over a free before half-time to put Park-Ratheniska ahead by one point at the break.

An injection of youth from Park-Ratheniska at half-time pushed them on at the start of the second-half. Kieran Delaney and a free from O’Connell increased the home sides advantage.

James Connolly, one of the subs brought on at half-time, pointed well before he got in for goal as superb play set him up to drill the ball into the top right corner. Mark Delaney opened his account with a fine score from play shortly after.

O’Connell pointed a free as Castletown were reduced to 14 men as John Gaughan was shown a second yellow card. Kieran Delaney scored yet again as Park-Ratheniska strolled towards the finishing line.

A free form Conor Walsh would be Castletown’s only score of the second-half as they were far inferior to their opponents.

Castletown were shown another red card as Evan Cuddy was sent to the line for a second bookable offence. Connolly added another point to his tally with O’Connell pointing yet another free. Another youngster Josh Mulhall scored a lovely point after excellent build-up play.

The win leaves Park-Ratheniska in a strong position to take one of the two quarter-final places in the three-team group.

Both sides will also have to play The Harps in the coming weeks.

Camross recovered from an eight-point half-time deficit to get the better of St Joseph’s in the opening round of the Laois JFC ‘A’ in Camross this evening.

St Joseph’s had led 1-8 to 0-3 at half time, 1-1 coming from Danny Hickey, 0-4 from Conor Kealy and a point each from David Brennan, Ian Shanahan and Noel Leech.

But the visitors would fail to score in the entire second half as Camross came roaring back.

With former Laois U-20 player Robert Tyrell leading the way in the scoring as well as points from Oisin Bennett, Eoin Gaughan and Odhran Phelan, Camross had the deficit back to three entering the crucial final stages.

Sub Mark Dowling then struck for the vital goal before Tyrell landed the winner late on.