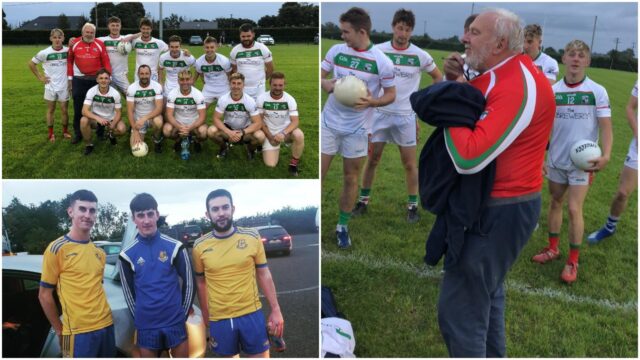 Last night saw Round 1 of the Laois Shopping Centre Junior ‘C’ football championship with eight games taking place at venues across the county.

Not only were the games highly dramatic – they also produced some wonderful stories and none more so than in Vicarstown where Rathdowney and Annanough’s second team clashed.

When the Rathdowney boys made the 50km trip across the county, they realised on arrival that only 12 players had shown up and as Junior C is 13-aside, the 2016 finalists were in danger of having to give a walkover.

72-year-old chairman Tim Barry had only travelled over to bring the jerseys but he wasn’t about to let his side down. So, donning a tracksuit, he took his position between the sticks and played the entire 60 minutes in the goals.

He simply has to be the oldest person to play a club championship match in Laois and indeed he is 54 years older than Rathdowney’s youngest player on the night – 18-year-old Dylan Carroll.

He left the kick-out duty to full back Shane Bowe but Tim is believed to have rolled back the years with some fine saves and was only beaten twice as Rathdowney won 8-8 to 2-2.

But all joking aside, this Rathdowney team are no mugs. Former Laois hurling captain and League of Ireland soccer star Ross King was in midfield and helped himself to a goal while his inter-county colleague and FIFA 20 champion Eric Killeen contributed 2-4 from full forward.

Former Laois U-20 hurlers Brandon McGinley and Paddy McCane also rattled a brace of goals while Damien Madden rounded off the rout with the eight goal.

Rathdowney play Borris-In-Ossory next in the quarter final and with rumours that another Laois hurler, Mark Kavanagh, may make an appearance, these lads could be dark horses to go all the way. And after a performance like that, Tim simply has to start again too.

There was plenty of drama in the other games too with a last minute goal and an appearance from an actor making headlines.

Defeated finalists from 2019 Colt are safely through to the quarter final after a win against The Heath and they will face Killeshin.

They were involved in an enthralling game with Ballyroan-Abbey which went right down to the wire and former chairman Gavin ‘Monkey’ Deering popping up with a late goal to win it by a point.

St Joseph’s third team went down to Park-Ratheniska’s second team but there was history made as three Farrell brothers, Peter (the manager), David and John, all togged for St Joseph’s.

While so too did actor and film producer Micheal Fleming who kicked a point but it wasn’t enough as Park-Ratheniska won 2-8 to 1-6 and advanced to meet Kilcotton who had an 11 point win over Ballyfin.

There were goals galore in the remaining two games as O’Dempsey’s third team put eight past Kilcavan’s second string while Clonaslee ran out four point winner over Courtwood.