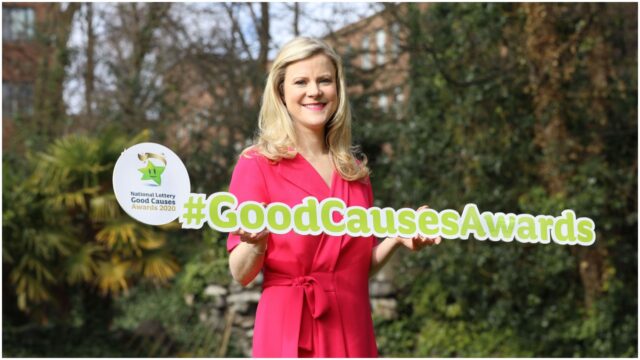 These awards were set up to honour the inspiring work and achievements of thousands of projects, clubs and individuals all over Ireland, who, with the help of the National Lottery Good causes funding, have had a huge impact on their local communities.

The finale will be presented by broadcaster and journalist, Grainne Seoige and the competition’s judging process will be chaired by Lotto presenter and RTÉ weather broadcaster, Nuala Carey. Both launched the National Lottery Good Causes Awards, which is now in its third year.

Speaking on launching the awards, Nuala Carey said it is fitting that the profound impact of various Good Causes in villages, towns and cities all over Ireland, is recognised.

She said: “The National Lottery is used to celebrating winners. However, we have thousands of winners, unsung heroes, who work quietly under the radar to make positive change in their communities and these Awards reflect that dedication and commitment.

“I was lucky enough to witness this having been on the judging panel for the national finals of the Good Causes Awards for the past two years so this year I am thrilled to be chairing the panel of judges.

“Through the National Lottery Good Causes Awards we want to show how ordinary, everyday people, organisations, projects and sports clubs are doing extraordinary things in their communities.

“This is work that often goes unrecognised and we are encouraging Good Cause beneficiaries to enter these awards to give them the opportunity to have their hard work honoured.”

The awards ceremony will take place on Saturday 20th February 2021 in the Mansion House in Dublin City Centre.

Applications for the Awards are now open and people can enter and check eligibility at www.lottery.ie/goodcausesawards.