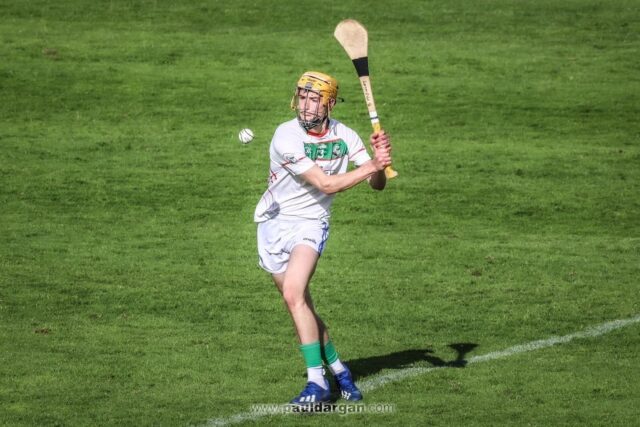 Champions Rathdowney-Errill are safely through to the semi-finals of the Laois SHC following a comfortable win over Abbeyleix in MW Hire O’Moore Park this afternoon.

And their 14-point win ensures they finish top of their group and go through to a semi-final meeting with Borris-Kilcotton in two weeks time. Clough-Ballacolla will play Rosenallis in the other semi-final.

But the win could have come at a cost with Mark Kavanagh, who scored 1-15, leaving the field in stoppage time after picking up a serious-looking shoulder/arm injury.

While Abbeyleix played against the stiff breeze in the opening half, they actually started quite well and early points from the lively Ciaran Byrne and Ciaran Carroll had them two up.

Ross King and Mark Kavanagh responded from play to level things up but the sides essentially traded points for the opening quarter and were level 0-7 each at the first water break.

In an empty stadium it was easy to hear that the Rathdowney-Errill management weren’t a bit happy with their charges with their lack of work rate questioned in the huddle.

And they duly responded by outscoring Abbeyleix by 1-10 to 0-2 in the second quarter.

At half time they led 1-17 to 0-9 with Mark Kavanagh already with nine points to his name and Jack Kelly with three from play from wing-back. Ross King had got their goal in the 26th minute while Paddy McKane hit two in a row and Brandon McGinley had been on target too.

Eoghan Fennelly had six points for Abbeyleix at the break, four of them coming from well-struck frees into the wind.

McGinley and Fennelly (free) swapped points early in the second half before Mark Kavanagh rifled a wonderful goal past his county colleague Enda Rowland.

A couple of long-range Rowland frees and another from Fennelly kept the scoreboard moving for Abbeyleix but they could never close the gap in any meaningful. By the water break it was 2-20 to 0-15.

A massive Enda Rowland point from play was somewhat of a highlight of the final quarter but the result was never in any doubt.

Rathdowney-Errill’s quest for back-to-back titles goes on. Abbeyleix’s season is at an end.