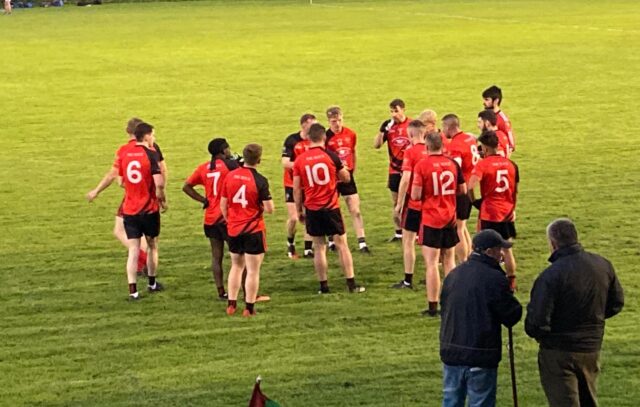 Aaron Dowling helped himself to 1-5 as The Rock qualified for the Laois IFC semi-final for the first time since 2016 thanks to an entertaining win over O’Dempsey’s in McCann Park in Portarlington this evening.

The Rock had to dig deep to see off a brave O’Dempsey’s challenge as last year’s junior champions were in touch right until injury time when Sean O’Neill fired home a penalty to finally make his side safe and then added a point with the last kick of the game to send them safely through.

On the overall balance of play, The Rock deserved to win but O’Dempsey’s will be kicking themselves over their wastefulness in front of goal, evident by the 14 wides they kicked over the course of the hour.

But The Rock had a plan and a system. It saw them bring plenty of men back, work hard, break at speed and get as much ball into their dangermen of Stephen McDonald and Aaron Dowling, who hit 2-8 between them.

They also made full use of their panel with Shane O’Connell coming on to score two points from play while veterans David Murphy and Tom McDonald also made an impact after being introduced – Murphy scoring a point with his first touch and McDonald winning the penalty that sealed the win.

Sean O’Neill and Aaron Dowling formed a lively spine of The Rock attack and with Stephen McDonald inside with Dowling, they caused plenty of problems for the O’Dempsey’s defence early on.

A Dowling free got the scoring underway and though the impressive Daithi Howlin cancelled that out with a free of his own, McDonald and Stephen Conroy both pointed from play to put The Rock two up.

Howlin and Derek Dunne responded from play for O’Dempsey’s but a piece of magic from Stephen McDonald set up Dowling for a brilliant goal. Howlin responded with a free but at the first water break The Rock led 1-3 to 0-4.

Conroy and Dowling pointed on the restart and though Sam Molloy hit back with a spectacular effort and Darren Finlay then punched over, The Rock got the last two scores of the half, both from Stephen McDonald. The first was a mark, the second from his lesser-used right boot. At half time The Rock led 1-7 to 0-6.

O’Dempsey’s, however, had their best spell in the first few minutes of the second half and three points in the first three minutes from Molloy, Jack Lennon and another Howlin free had the gap back to one.

Dowling responded with a much-needed point for The Rock after a good team move and while Howlin hit back with another free, Dowling and Shane O’Connell pointed to leave The Rock 1-10 to 0-10 up at the water break.

O’Connell, who had come on for the injured Wes Bergin late in the first half, was really coming into it now and he fired over another from play to push the lead out to four again.

Howlin replied again, this time from play, but David Murphy made an immediate contribution when he pointed after coming only for Liam Whelehan and Howlin to bring it back to two as the game ticked towards the 60th minute.

But The Rock weren’t to be denied and O’Neill made no mistake from the penalty spot before Dowling then put the icing on the cake with a point deep in injury time.

It’s been The Rock’s most impressive championship campaign in years but they’re far from finished yet.

They will take on Clonaslee or Crettyard in the semi-final next weekend.

We initially reported that Aaron Dowling had scored The Rock’s penalty when in fact it had been Sean O’Neill.