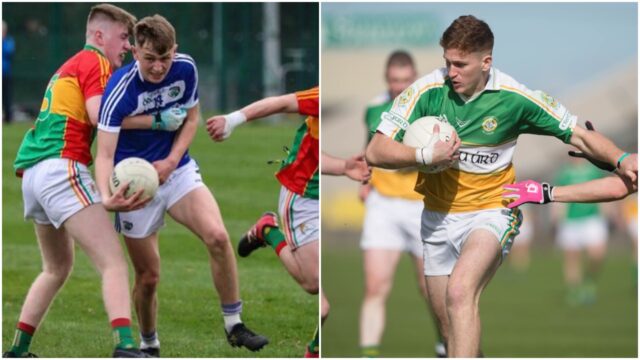 A heavily bandaged Ciaran Burke and a mercurial Evan O’Carroll led the way for Crettyard as they absolutely thrashed Mountmellick to reach the IFC final in Stradbally this evening.

O’Carroll finished the game with 2-10, 2-4 from play, and gave the Mountmellick defenders a torrid time throughout – especially in the first half where all the damage was done.

While Burke, who received a nasty injury in the first half of the Premier Intermediate semi final for The Harps, played for 45 minutes in midfield with a heavily strapped quad and was sublime.

He won countless kick-outs and played a crucial role in two of the goals before being given a rest with the result in the bag.

For Mountmellick, it is a second consecutive defeat at the semi final stage and they will probably be left ruing the decision not to put in a sweeper in the first half to try and help Gearoid Hanrahan in his battle with one of the best forwards in the province – O’Carroll.

Crettyard, who were without defenders Brian O’Sullivan and James Brennan through injury, grabbed the game’s first four points via Cormac Murphy and O’Carroll (3) before Eddie Melia and Niall Mullen got Mountmellick off the mark after 12 minutes.

But we had the first goal soon after when a Ciaran Burke fielded a kick-out and fed Brian Brennan. He switched the ball to Patrick Brennan who looped it around to Michael Nash on the edge of the square. The forward’s shot was saved by keeper Eoghan Keogh but he made no mistake with the rebound.

Niall Mullen replied with a free but Crettyard led 1-4 to 0-3 at the water break.

O’Carroll and David Kelly traded efforts when play resumed but Crettyard put the game to bed in the six minutes of first half injury time that followed.

O’Carroll landed another brace and Patrick Brennan got his first before the victors added two more goals.

The first was once again set up by the excellent Ciaran Burke who floated a ball into O’Carroll and he shrugged off Gearoid Hanrahan to score.

Minutes later, Cristoir Maher turned provider for O’Carroll who finished neatly into the bottom corner to make it 3-8 to 0-4.

It was game over after that and the second half played out in that fashion with the sides trading five points each.

The only significant action came in front of the Crettyard goal where Eoin O’Shea made a string of saves to preserve his clean sheet.

They now go forward to face Clonaslee in the final on Saturday evening.