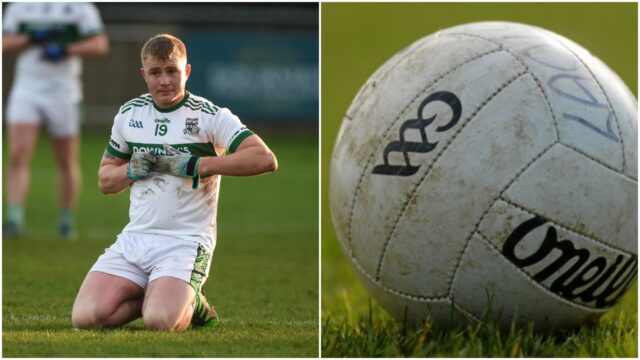 Portlaoise are through to a Junior A semi-final after they needed extra-time to get the better of Barrowhouse this afternoon.

A last minute goal in normal time from Scott Lawless brought the game to extra-time – and from there, Portlaoise went on to win.

Barrowhouse opened proceedings with a free from Fergal Murphy and Portlaoise got off the mark through Ruairi Lewis.

Jojo Salmon and a free from Cormac Dunne gave Portlaoise an early edge. Murphy and Dunne traded scores from play before Barrowhouse got the game’s first goal.

Gary Whelan was adjudged to have fouled James Baldwin in the square and Baldwin himself stepped up to slot home the penalty.

Barrowhouse led by a single point going into the first water break with both sides finding their feet in the game.

The second quarter wasn’t too eventful as it only had two scores, one from Lawless and a free from Murphy.

Barrowhouse still held on to a slender one point advantage at the break – 1-3 to 0-5.

Barrowhouse were fastest out of the blocks in the second half as they fired over three points without reply. Baldwin pointed from play and Murphy tapped over two frees.

Portlaoise were then reduced to 14 men after a straight red card for Brian McCormack.

Dunne got one back for Portlaoise with a free before Lawless got his second point of the game. Approaching the final quarter, only two points spilt the sides.

Martin Langton scored a sumptuous point before he too left the field as he received a black card having already been shown a yellow card.

Jack Fennell brought the game back to two points again but Barrowhouse looked to be in control of their own destiny. Fennell was then black carded as Portlaoise ended regulation time with 13 men.

Portlaoise were down by four points with 62 minutes on the clock. Dunne tapped over a free before with the last touch of the game, Lawless was the spare man at the back post to tap into an empty net and send the game to extra-time.

Both sides started the extra period with a full contingent again as the cards in regulation time were scrapped.

Portlaoise showed their strength and quality in extra-time as they held Barrowhouse scoreless.

Salmon got his second point of the game while Fergal Fennell got Portlaoise’s second goal with a well-taken finish.

The game ended with Dunne and Lawless pointing as Portlaoise ran out six point winners in the end.

Portlaoise will now play the winner of Castletown and The Heath.