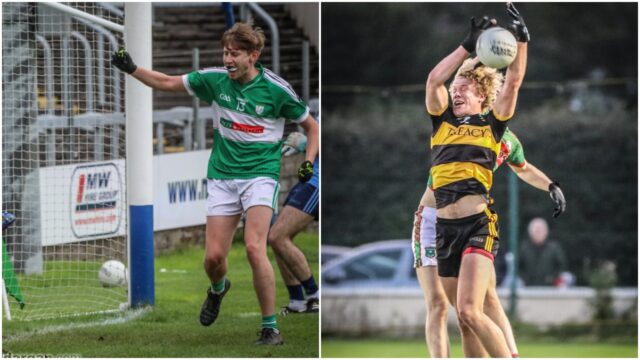 The Ballyfin footballers are through to their second successive, and ever, Laois senior football championship semi final following a two point win over The Heath.

Sean Moore was the difference as his display was absolutely outstanding from start to finish – ending the game with eight points and five of those from play.

His movement and cleverness in possession was just a joy to watch as he led his team through to the last four again.

The Heath battled gamely but their wait for a first semi final appearance since 2005 goes on.

The first ten minutes were extremely even. Ballyfin had the wind but it was The Heath who opened the scoring through Conor Booth.

The same played then landed a free while Ballyfin had two Sean Moore efforts to leave us level at the end of that period.

But then Ballyfin began disrupting The Heath kick out and scores began to come far more easily for them then.

Sean Moore, James Moore and James Finn all pointed with a late Robbie Ging score leaving it 0-6 to 0-3 at the water break.

Ballyfin had a great goal chance after that as Aidan Keenaghan wriggled away from Denis Booth but his low shot was well saved by keeper Joe Walshe.

Sean Moore added two more but so too did the lively Robbie Ging to leave three in it at half time – Ballyfin 0-8 The Heath 0-5.

The Heath brought on Chris Bergin at half time and he cut the gap instantly before keeper Joe Walshe left the minimum between them after 40 minutes with a 45.

Ballyfin were finding it tough going against the wind but a mistake in The Heath defence allowed Max Connolly to set up Sean Moore for his seventh point.

Ballyfin almost had a goal then as we entered the final quarter when James Finn’s free struck the crossbar and cannoned into the air – causing an almighty scramble when it dropped. The ball eventually struck a Heath defender and was heading for the back of his own net only for Jimmy Nerney to make an outstanding goalline clearance.

The sides then headed for the water break but a James Finn free after 50 minutes left Ballyfin three ahead once more.

The Heath just couldn’t break Ballyfin down and when they worked a wonderful score for Sean Moore, his eighth, it looked like it was game over after 56 minutes.

Daithi Carroll landed one from distance but Ballyfin had the chance to kill the game as we entered injury time when Sean Moore’s deft flick set up Jack Cleary – one-on-one with keeper Joe Walshe. But the corner back took the shot on the half volley and dragged it wide.

The drama wasn’t done there either as a late Denis Booth free from 40 metres was misjudged by keeper Rob Foran, who thought it was going wide, and it hit the post.

The ball came back to Liam Kinsella who was fouled. Chris Bergin went for goal from that free but his effort went over and Ballyfin held on.