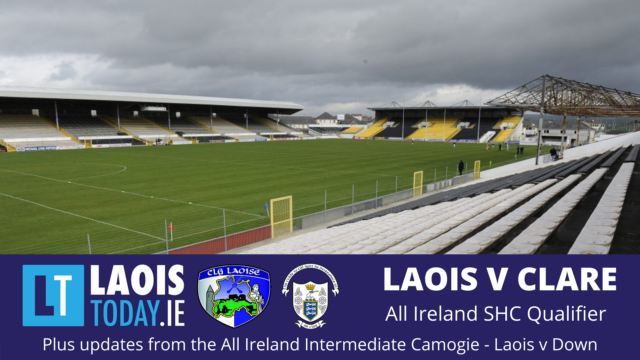 It’s another busy day for Laois GAA with the county’s hurling and camogie teams both in championship action.

It’s straight knockout for the hurlers, who make the trip to Kilkenny to play Clare in Round 1 of the All-Ireland Hurling Qualifiers.

While the camogie team are also on the road as they head for Ashbourne to take on Down in Round 2 of the All Ireland intermediate championship.

The hurlers are up first as their game is at 1.15pm in Kilkenny’s Nowlan Park.

Laois lost heavily to Dublin in their Leinster quarter final two weeks ago and have been forced into two changes.

Ronan Broderick (knee) and James Ryan (thumb) both suffered injuries in that defeat and are out.

They have been replaced by Jack Kelly and Mark Kavanagh.

Clare have made four changes to the side who were beaten by Limerick.

They are replaced by Paul Flanagan, Aidan McCarthy, Colin Guilfoyle and Aaron Shanagha.

It is do or die for both teams.

The Laois camogie time are in Ashbourne at 2pm to face Down for a chance to reach the All-Ireland semi finals.

But if they lose, they will still have a quarter final to contest.