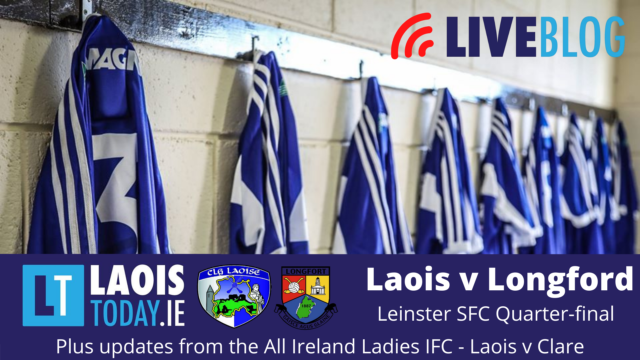 There are two Laois football teams in championship action this afternoon and we’ll keep you up to date with minute-by-minute updates from the two venues.

Mike Quirke’s Laois senior football team begin their championship season with a straight knockout clash with Longford in Glennon Brothers Pearse Park while Clonmel is a neutral venue for the meeting of Laois and Clare in the All Ireland intermediate ladies football championship.

It’s Quirke’s first championship match as Laois manager and he’ll be hoping that his side can kick on from their dramatic league win over Fermanagh two weeks ago to book a Leinster semi-final place against Dublin next weekend.

Dublin were comfortable winners over Westmeath last night in MW Hire O’Moore Park as they got the defence of their All Ireland title off to a predictable winning start.

In a four-team group with only one top team to go through to the semi-finals, a Laois win would set them up for a straight shootout against Kildare next weekend.

Kildare play Sligo today in the other group game.

You can follow all of the action from the two games here. The ladies game throws in at 1pm while the men get underway at 1.30pm.