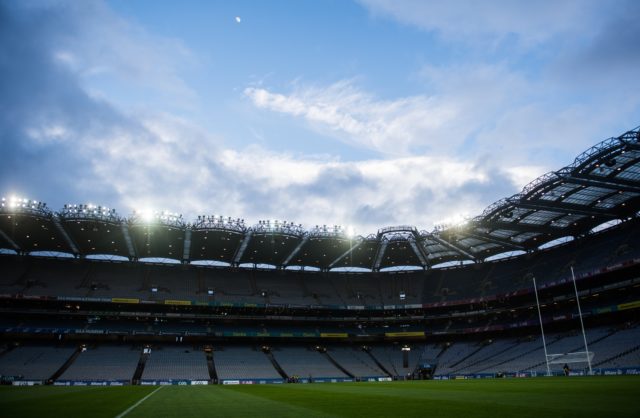 And so the Laois football season is at an end after Dublin’s all-conquering side proved too strong in Croke Park this afternoon.

In an eerily-empty GAA HQ, Laois started well and gave as good as they got but they were always swimming against the tide and Dublin had the game as good as won when they took a 1-7 to 0-2 lead in at half time.

Laois had battled well in the opening quarter and played some good football going forward and tackled hard at the other end.

At the first water break they trailed 0-3 to 0-2 after Gary Walsh and Paul Kingston had scored two fine points from play. Dublin were ahead thanks to two Dean Rock frees and one from play from midfielder Brian Fenton.

There had been plenty of positives for Laois in that opening quarter with Brian Byrne, Paul Kingston, Evan O’Carroll and Gary Walsh all showing well up front and Robbie Pigott, Paddy O’Sullivan and Sean O’Flynn to the fore in defence.

But it was that second quarter where Dublin made their move and they scored 1-4 without reply to be eight up at the break, the goal in the 24th minute from Sean Bugler.

Ciaran Kilkenny, Niall Scully and Paddy Small all pointed from play too.

The second half followed a similar enough pattern to the first quarter. Evan O’Carroll got the scoring under way with a point from a mark but Ciaran Kilkenny’s third point from play and then a goal in the 41st minute put 12 in it.

A Gary Walsh free and a Paul Kingston effort from play either side of another two from Fenton kept things ticking along but Dublin got the last two scores before the water break to lead 2-12 to 0-5.

Laois had four subs made by the 48th minute and Ross Munnelly and Brian Byrne added points but there was no stopping Dublin who had 22 points to spare at the finish.