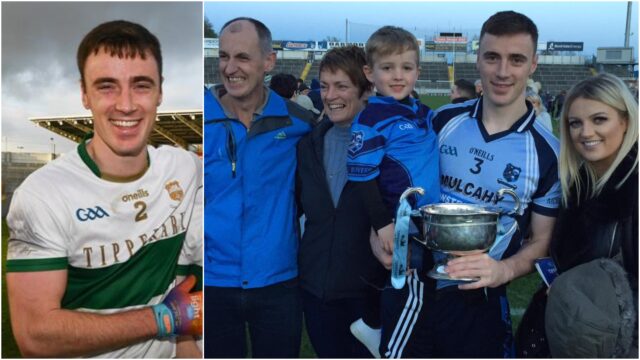 On a hugely historic weekend, the Tipperary footballers were the biggest story of them all.

The 100th anniversary of the Bloody Sunday massacre in Croke Park, where 14 people including Tipperary player Michael Hogan were killed by British forces, was always going to be a poignant occasion and the GAA marked that in Dublin on Saturday evening.

The Tipp footballers, wearing special commemorative jerseys similar to what were worn in 1920, then went and made it even more special by claiming their first Munster title in 85 years on Sunday.

The Tipperary player wearing the same Number 2 worn by Michael Hogan was Alan Campbell from the Moyle Rovers club.

Alan’s mother is Patty Brennan from Ratheniska, a family that have contributed hugely to GAA in Laois.

Patti herself was involved with the great Heath ladies football teams of the 1980s before settling in the Clonmel area and Alan has been involved at a high level at club level with Moyle Rovers, whom he won a senior title with in 2018, and with Tipperary.

He was also on the team that got to the All Ireland semi-final in 2016.

With no supporters permitted to attend, Patty and her husband Tommy were watching on on their TVs similar to everyone else around the country and there was particular pride in the Park-Ratheniska and Ballyroan-Abbey clubs where many of Alan’s cousins play.

His uncles Denis and Liam were Park-Ratheniska stalwarts for years while his cousins Danny, Conor and Michael Brennan play football for Ballyroan-Abbey and hurling for Park-Ratheniska/Timahoe.

Gavin Tynan, whose mam Mary is a sister of Patty’s, also plays for Ballyroan-Abbey while his brother Sean plays for Park-Ratheniska.

Tipperary now play Mayo in the All Ireland semi-final in two weeks time with Dublin playing Cavan in the other semi-final.